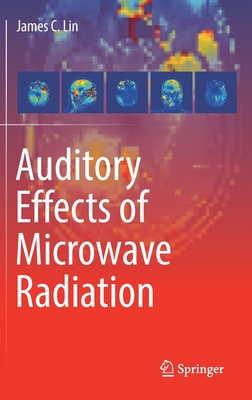 This book examines the human auditory effects of exposure to directed beams of high-power microwave pulses, which research results have shown can cause a cascade of health events when aimed at a human subject or the subject's head. The book details multidisciplinary investigations using physical theories and models, physiological events and phenomena, and computer analysis and simulation. Coverage includes brain anatomy and physiology, dosimetry of microwave power deposition, microwave auditory effect, interaction mechanisms, shock/pressure wave induction, Havana syndrome, and application in microwave thermoacoustic tomography (MTT). The book will be welcomed by scientists, academics, health professionals, government officials, and practicing biomedical engineers as an important contribution to the continuing study of the effects of microwave pulse absorption on humans.

Dr. James C. Lin is Professor Emeritus at the University of Illinois in Chicago (UIC), where he has served as Head of the Bioengineering Department, Director of the Robotics and Automation Laboratory, Director of Special Projects in the College of Engineering, and Professor in the departments of Electrical Engineering, Bioengineering, Physiology, and Biophysics. He is a Fellow of AAAS, AIMBE, and URSI, and a Life Fellow of IEEE. He held a NSC Research Chair and was an IEEE-EMBS distinguished lecturer. He is a recipient of the d'Arsonval Medal from the Bioelectromagnetics Society (BEMS), IEEE EMC Transactions Prize Paper Award, IEEE COMAR Recognition Award, and CAPAMA Outstanding Leadership and Service Awards. He served for two years as a member of the U.S. President's Committee for National Medal of Science.He has authored or edited 13 books, authored 380+ book chapters and articles in journals and magazines, and made 280+ conference presentations. In addition to fundamental scientific contributions to electromagnetics in biology and medicine, he has pioneered several medical applications of RF and microwave energies, including invention of minimally invasive microwave ablation treatment for cardiac arrhythmia and noncontact and noninvasive microwave sensing of physiological signatures and vital signs. Dr. Lin has chaired several international conferences sponsored by the IEEE, BEMS, URSI, and ICST (founding chairman of Wireless Mobile Communication and Healthcare - MobiHealth). He has been Editor-in-Chief of the Bioelectromagnetics journal since 2006 and has served as guest editor of several journals. He is a member of Sigma Xi, Phi Tau Phi, Tau Beta Pi, and Golden Key honorary societies. He also served on numerous advisory committees and panels for the U.S. Congress, Office of the U.S. President, National Academy of Sciences, National Research Council, National Science Foundation, National Institutes of Health, Marconi Foundation, and the World Health Organization.