We Must Be Brave (CD-Audio) 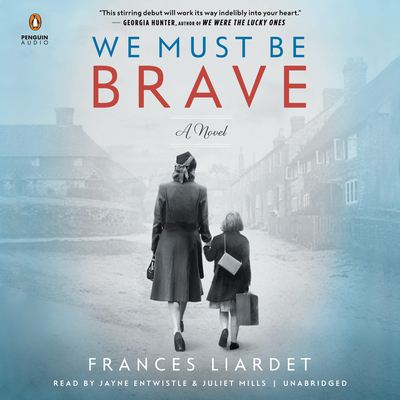 "A powerful story that proves how love itself requires courage." --Delia Owens, author of Where the Crawdads Sing

Spanning World War II and the sweep of the twentieth century, We Must Be Brave explores the fierce love that we feel for our children and the power of that love to endure. Beyond distance, beyond time, beyond life itself.

A woman. A war. The child who changed everything.

December 1940. As German bombs fall on Southampton, England during World War II, the city's residents flee to the surrounding villages. In Upton village, amid the chaos, newly married Ellen Parr finds a girl asleep, unclaimed at the back of an empty bus. Little Pamela, it seems, is entirely alone.

Ellen has always believed she does not want children, but when she takes Pamela into her home, the child cracks open the past Ellen thought she had escaped and the future she and her husband Selwyn had dreamed for themselves. As the war rages on, love grows where it was least expected, surprising them all. But with the end of the fighting comes the realization that Pamela was never theirs to keep. Spanning the sweep of the twentieth century, We Must Be Brave explores the fierce love that we feel for our children and the power of that love to endure. Beyond distance, beyond time, beyond life itself.

Frances Liardet is a child of children of the Second World War. She has an MA in creative writing from the University of East Anglia and studied Arabic at Oxford, before traveling to Cairo to translate modern Egyptian novelists, including Naguib Mahfouz and Edwar al-Kharrat. Liardet currently lives in Somerset, England, with her husband and daughter, and helps to run a summer writing session called Bootcamp. We Must Be Brave is her American debut.

“Be prepared to surrender—to Liardet's gorgeous prose, her haunting storyline, and the question that will lodge in your heart long after you’ve finished: What would I have done? For anyone who has ever loved a child, this stirring debut will work its way indelibly into the folds of your memory, and of your heart.”—Georgia Hunter, New York Times bestselling author of We Were the Lucky Ones

“Dazzling . . . As a testament to parental love and its relationship to the heartbreaking, healing, almost ungraspable passage of time, We Must Be Brave is a great success: richly observed, lovingly drawn, and determinedly clear-eyed to the last.” –Guardian (UK)

“Vividly portrayed....Liardet reminds us that mother-daughter love can arise from thrown-together hearts during the cruelest rubble of war. Through every scene, we see the tattered socks, the doll faces, the honey-smells of baby skin, but mostly we feel the strength and endurance of heart-crushing love. The war and weather-etched faces and life-long relationships of the villagers show us that real family has little to do with worn down definitions. This is a powerful story that proves how love itself requires courage.”—Delia Owens, New York Times bestselling author of Where the Crawdads Sing

“This beautiful novel will make you hug your own family a little closer. It’s about love, loss, and what makes a family in World War II-era England. Fans of the sepia tones of historical fiction will find a lot to love here, and it may even put your own life into perspective.” —Good Housekeeping

“Liardet’s lovely book [is] about love and loss, and our chosen families. Dare you not to weep.” —Woman’s Day

“Intense passion is concealed behind a facade of British modesty in this...blazing story of hearts wounded and restored.”—Kirkus Reviews (starred)

“Ellen, beset by hardship from a young age, ends up happy in a marriage blanc with the much older Selwyn, and is convinced she doesn’t want children until Pamela arrives. Then she experiences an all-consuming love that Liardet captures on the page with a heartbreaking conviction.”—The Times (London)

“Moving...Readers will be captivated by Ellen’s story, which is bolstered by a swift plot and characters who realistically and memorably grow.”—Publishers Weekly

“[A] tearjerker about motherhood and loss. . . Liardet convincingly captures Ellen's inner emotional life and movingly depicts how a woman who thought she didn't want children could bond so strongly with one child in particular. Readers who enjoy tales of village life will appreciate the quirky cast of characters who surround Ellen . . . Recommended for historical fiction fans seeking slow-paced, emotional reads.” —Library Journal

“This is storytelling at its best. Wise, generous and captivating.”—Sarah Winman, author of Tin Man

“Beautifully written. Its scope is ambitious, as it seeks to portray the longtime ravages that the war and its attendance upheavals perpetrated upon the home front. . . [This historical war novel] is different and original.” —Historical Novel Review

"Liardet offers up a contemplation on grief and loss through history’s lens. . . . It’s deeply moving and wonderfully told, so be sure to bring tissues." —B&N.com

“We Must Be Brave is a wonderful novel. A beautifully written story of love and loss, with thoughtfully crafted characters and so much to think about long after you’ve finished reading it. It is one of those novels you can talk about for hours - the perfect book club read.”—AJ Pearce, author of Dear Mrs. Bird

“Deeply moving...A stunningly accurate portrayal of the all-encompassing depth of a mother’s love (whether she’s the biological mother or not). Read it and weep.”—AARP Magazine

“A beautifully written story that explores love, loss, resilience, and the bonds of motherhood over the course of the 20th century. A sweeping, heartfelt novel about what it means to truly love a child.”—Jillian Cantor, author of The Lost Letter and In Another Time