Someone to Cherish (The Westcott Series #8) (Mass Market) 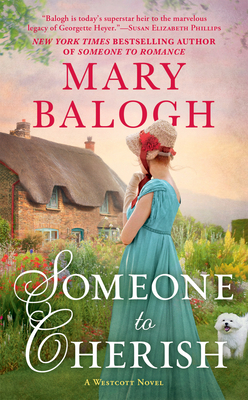 This is book number 8 in the The Westcott Series series.

Is love worth the loss of one's freedom and independence? This is what Mrs. Tavernor must decide in the new novel in the Westcott series from New York Times bestselling author Mary Balogh.

When Harry Westcott lost the title Earl of Riverdale after the discovery of his father's bigamy, he shipped off to fight in the Napoleonic Wars, where he was near-fatally wounded. After a harrowing recovery, the once cheery, light-hearted boy has become a reclusive, somber man. Though Harry insists he enjoys the solitude, he does wonder sometimes if he is lonely.

Lydia Tavernor, recently widowed, dreams of taking a lover. Her marriage to Reverend Isaiah Tavernor was one of service and obedience, and she has secretly enjoyed her freedom since his death. She doesn't want to shackle herself to another man in marriage, but sometimes, she wonders if she is lonely.

Both are unwilling to face the truth until they find themselves alone together one night, and Lydia surprises even herself with a simple question: "Are you ever lonely?" Harry's answer leads them down a path neither could ever have imagined...

Mary Balogh has written more than one hundred historical novels and novellas, more than forty of which have been New York Times bestsellers. They include the Bedwyn saga, the Simply quartet, the Huxtable quintet, the seven-part Survivors' Club series, and the Westcott series.

Praise for Mary Balogh and her novels

“The seamless plotting and enticing characters make this a romance to be savored. Balogh is in fine form, and this may be her best Regency to date.”—Publishers Weekly, starred review

“A must-read for fans of the series, this installment is a continuation of the high-quality characters and plot that readers have come to expect from Mary Balogh.”—Library Journal, starred review

“Sweetly satisfying… One of the loveliest things about this romance is how, as Lydia comes into her own, the reader gets to watch Harry’s view of her shift accordingly.”—BookPage

“This is a love story that earns the name on every level, not just for the love the hero and heroine find but also for the love you'll feel for everyone involved by the time you reach the final page.”—BookPage, starred review

“Mary Balogh does a wonderful job of balancing the romantic spark with stellar storytelling and character development.”—Fresh Fiction

“Someone to Romance was another engaging, heartwarming, and slightly spicy Regency romance from Mary Balogh, an author who writes such stories so well.”—Austenprose

"Wistful yet hopeful, the story is a needed addition to a genre that usually celebrates the romances of younger protagonists."—Kirkus Reviews

“The balance between sweet and bitter produces a complex and winning love story.”—Publishers Weekly

“The sheer perfection of Balogh’s prose in the fifth superbly written installment in the Westcott series marries her rare gift for crafting realistically nuanced characters to produce another radiant Regency historical romance by one of the genre’s most resplendent writers.”—Booklist, starred review

“With tenderness, humor, and infinite finesse, Balogh turns the classic younger woman/older man pairing on its well-worn ear in another sigh-worthy [novel] that readers are sure to savor.”—Library Journal, starred review

“The quiet, authentic intensity of the characters’ emotions is a hallmark of Balogh’s work, and it is a pleasure to experience each heart-wringing moment in this romance made for warming a winter night.”—BookPage

“A love story nearly perfect in every way.”—Booklist, starred review

“A story that is searing in its insight, as comforting as a hug, and a brilliant addition to this series. Another gem from a master of the art.”—Library Journal, starred review

“With her signature voice and steady pace, Balogh crafts a thoughtful, sweet Regency-era love story to follow Someone to Hold.”—Publishers Weekly

“Balogh’s delightful ugly duckling tale may be the nonpareil Regency romance of the season.”—Booklist, starred review