The World Cannot Give (Paperback) 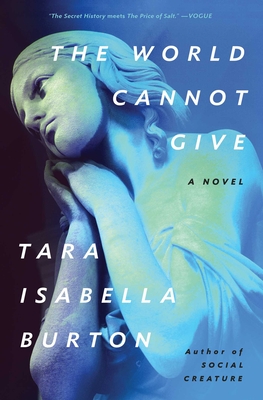 By Tara Isabella Burton
$17.99
Unavailable
Not Yet Published

“The Secret History meets The Price of Salt” (Vogue) in this “equal parts dangerous and delicious” (Entertainment Weekly) novel about queer desire, religious zealotry, and the hunger for transcendence among the members of a cultic chapel choir at a Maine boarding school—and the ambitious, terrifyingly charismatic girl that rules over them.

When shy, sensitive Laura Stearns arrives at St. Dunstan’s Academy in Maine, she dreams that life there will echo her favorite novel, All Before Them, the sole surviving piece of writing by Byronic “prep school prophet” (and St. Dunstan’s alum) Sebastian Webster, who died at nineteen, fighting in the Spanish Civil War. She soon finds the intensity she is looking for among the insular, Webster-worshipping members of the school’s chapel choir, which is presided over by the charismatic, neurotic, overachiever Virginia Strauss. Virginia is as fanatical about her newfound Christian faith as she is about the miles she runs every morning before dawn. She expects nothing short of perfection from herself—and from the member of the choir.

Virginia inducts the besotted Laura into a world of transcendent music and arcane ritual, illicit cliff-diving and midnight crypt visits: a world that, like Webster’s novels, finally seems to Laura to be full of meaning. But when a new school chaplain challenges Virginia’s hold on the “family” she has created, and Virginia’s efforts to wield her power become increasingly dangerous, Laura must decide how far she will let her devotion to Virginia go.

The World Cannot Give is a “hypnotic and intense” (Shondaland) meditation on the power, and danger, of wanting more from the world.

Tara Isabella Burton’s debut novel, Social Creature, was named a Best Book of the Year by The New York Times, Vulture, and The Guardian. She has written on religion, culture, and place for The New York Times, National Geographic, The Washington Post, The Wall Street Journal, City Journal, The Economist’s 1843, Aeon, The BBC, The Atlantic, Salon, The New Statesman, and The Telegraph. She is a columnist at Religion News Service, a contributing editor at American Purpose, and the former staff religion writer at Vox. Her fiction has appeared in Granta, Volume 1 Brooklyn, The New Yorker’s Daily Shouts, Tor, PANK, and more. She received a doctorate in theology from Trinity College, Oxford, where she was a Clarendon Scholar, in 2017.