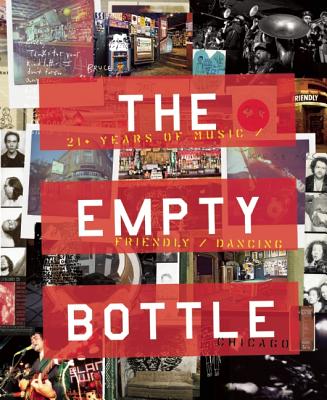 Cheap drinks, bathroom grafitti, and formidable performances have ruled for nearly a quarter of a century at Chicago's Empty Bottle. From this collection of photographs, interviews, and essays culled from a community of music fans, bartenders, booking agents, bouncers, and underground musicians emerges a kaleidoscopic history of this influential hole-in-the-wall rock venue, named one of "The Best Rock Clubs in America" by Rolling Stone. Featuring a foreword by John Darnielle of The Mountain Goats and first hand interviews with members of The Flaming Lips, Interpol, Low, OK Go, Vandermark Five, Girl Talk, The Rapture, Red Red Meat, The Sea and Cake, and more, as well as rarely-seen, full-color photographs and reproductions of original silkscreen gig posters, this collection is the tell-all confessional from a bar with countless stories to share. Each anecdote is an opportunity to relive experiences that seem conceivable only at the Bottle: watching The Flaming Lips play for a capacity crowd; shooting pool with Krist Novoselic of Nirvana; standing ten feet away from Arcade Fire as they perform a show that could be best described as a "spiritual tent revival for secular indie rock fans." Those who choose to read the book cover to cover will find that many of the stories intersect and mutate, remarking on the complexities of memory, giving in to the growing older, and what it means to look back on a particular time in your life and realize you were part of something bigger than yourself. As musician and contributor Bobby Conn remarked, "It's not really the place. It's everyone making it happen there."

John Darnielle is a writer, composer, guitarist, and vocalist for the band the Mountain Goats. His debut novel Wolf in White Van was released in 2015. He lives in Durham, North Carolina, with his wife and son.

John E. Dugan: Between touring as a rock drummer, stints as a graphic designer and human rights group organizer, John Dugan started his writing career as a reviewer for the Washington City Paper. He was the Senior Web Editor for Time Out Chicago, Web Editor/Informer Editor at Design Bureau magazine, and Editor for Pitchfork's NothingMajor.com.As a freelance writer, his live reviews, music, arts, culture and science feature writing and blogging has appeared in the Economist online, Spin.com, RollingStone.com, Billboard.com, the Chicago Reader, Time Out London, the Chicago Tribune, Time Out Bucharest, Maviology, LiveDaily, Michigan Avenue, and numerous other publications. John Darnielle is a writer, composer, guitarist, and vocalist for the band the Mountain Goats; he is widely considered one of the best lyricists of his generation. He lives in Durham, North Carolina, with his wife and son.