The Great God Pan and Other Weird Stories (Paperback) 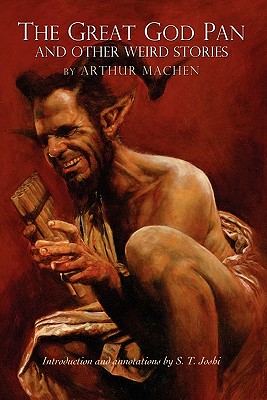 "Of creators of cosmic fear raised to its most artistic pitch, few can hope to equal Arthur Machen." -- H. P. Lovecraft
Arthur Machen (1863-1947), Welsh novelist and essayist, is considered one of the most important and influential writers of his time. While displaying a preoccupation with pagan themes and matters of the occult -- an interest he shared with his close friend, the distinguished scholar A. E. Waite -- his writing transcends the genre of supernatural horror. Oscar Wilde, W. B. Yeats, Sir Arthur Conan Doyle, as well as Paul Bowles and Jorge Luis Borges are just a few of the literary notables who are counted among his admirers. Machen is also a key figure in the development of pulp magazine fiction (e.g., Weird Tales), a line of ancestry that leads directly to today's popular graphic novels. Further, Machen's name often crops up in the writings of theorists and practitioners of psychogeography, a school of thought and literature which explores the hidden links between the landscape and the mind.
In "The Great God Pan," Arthur Machen delivers a tense atmospheric story about a string of mysterious suicides. With its suggestive visions of decadent sexuality, the work scandalized Victorian London. This edition also includes "The White People," "The Inmost Light," and "The Shining Pyramid." Taken together, these short stories are considered some of the first works of horror and have inspired generations of subsequent writers and creators.

Welsh novelist and essayist Arthur Machen (1863-1947) ranks among the most important and influential writers of his era. Although preoccupied with pagan themes and occult practices, his writing transcends the genre of supernatural horror. Machen also played a key role in the development of the pulp magazine fiction that foreshadowed today's popular graphic novels.