A Line of Driftwood: The ADA Blackjack Story (Paperback) 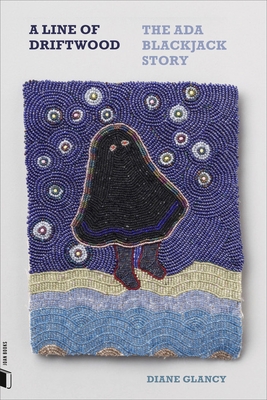 This moving retelling of a heroic woman's journey demonstrates that history lives through an intimate connection between two women beyond time's borders.--Booklist, starred review

In September 1921, a young Inupiat woman named Ada Blackjack traveled to Wrangel Island, 200 miles off the Arctic Coast of Siberia, as a cook and seamstress, along with four professional explorers. The expedition did not go as planned. When a rescue ship finally broke through the ice two years later, she was the only survivor.

Diane Glancy discovered Blackjack's diary in the Dartmouth archives and created a new narrative based on the historical record and her vision of this woman's extraordinary life. She tells the story of a woman facing danger, loss, and unimaginable hardship, yet surviving against the odds where four "experts" could not. Beyond the expedition, the story examines Blackjack's childhood experiences at an Indian residential school, her struggles as a mother and wife, and the faith that enabled her to survive alone on a remote island in the Arctic Sea.

Glancy's creative telling of this heroic tale is a high mark in her award-winning hybrid investigations of suffering, identity, and Native American history.

Diane Glancy is a poet, novelist, essayist, playwright, and professor emeritus at Macalester College. Her works have won the Pablo Neruda Prize for Poetry, the Arrell Gibson Lifetime Achievement Award from the Oklahoma Center for the Book, a Lifetime Achievement Award from the Native Writers' Circle of the Americas, a Juniper Prize for Poetry, and an American Book Award. In 2018, Publishers Weekly named her book Pushing the Bear: A Novel of the Trail of Tears one of the ten essential Native American novels. Her 2020 work, Island of the Innocent: A Consideration of the Book of Job continues and deepens a lifelong exploration of the religious and cultural dimensions of identity.