What Could Be Saved (Compact Disc) 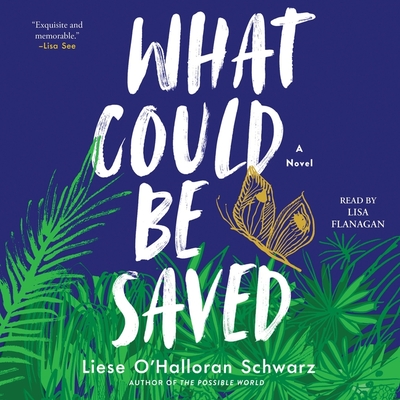 “Wow. What a riveting read! Part family saga, part mystery, What Could Be Saved is just extraordinary. It is a moving, powerful story of loss and regret, loyalty and redemption. Schwarz’s crisp, lyrical prose lays bare the emotional journey of each member of this unforgettable family. These beautifully drawn, tragically flawed characters will remain with me long after turning the last page.”
— Anderson McKean, Page and Palette, Fairhope, AL

"A harrowing tale of the lies of omission and the lies of commission that can break a family apart, What Could Be Saved is a delicious hybrid of mystery, drama, and elegance: rich with detail, lush in language, and capable of keeping you on the edge of your seat." --Jodi Picoult, #1 New York Times bestselling author An enthralling, redemptive novel set in Bangkok in 1972 and Washington, DC, in 2019 about an expatriate child who goes missing, whose family is contacted decades later by a man claiming to be the vanished boy.Washington, DC, 2019: Laura Preston is a reclusive artist at odds with her older sister Bea as their elegant, formidable mother slowly slides into dementia. When a stranger contacts Laura claiming to be her brother who disappeared forty years earlier when the family lived in Bangkok, Laura ignores Bea's warnings of a scam and flies to Thailand to see if it can be true. But meeting him in person leads to more questions than answers. Bangkok, 1972: Genevieve and Robert Preston live in a beautiful house behind a high wall, raising their three children with the help of a cadre of servants. In these exotic surroundings, Genevieve strives to create a semblance of the life they would have had at home in the US -- ballet and riding classes for the children, impeccable dinner parties, a meticulously kept home. But in truth, Robert works for American intelligence, Genevieve finds herself drawn into a passionate affair with her husband's boss, and their serene household is vulnerable to unseen dangers in a rapidly changing world and a country they don't really understand. Alternating between past and present as all of the secrets are revealed, What Could Be Saved is an unforgettable novel about a family shattered by loss and betrayal, and the beauty that can exist even in the midst of brokenness.