On This Day in History Sh!t Went Down (Paperback) 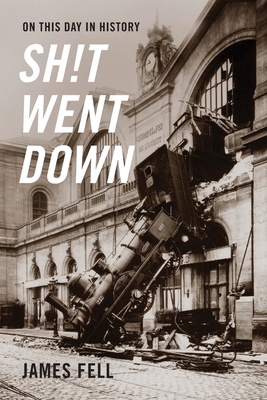 Mae West was sent to jail for "corrupting the morals of youth" with her first Broadway play. When participation in the Hitler Youth became mandatory in Germany, groups of teen "pirates" rebelled. Muhammad Ali refused to "drop bombs and bullets on brown people" in Vietnam. A dog sled relay carried life-saving medicine 674 miles through -50 temperatures to rescue children dying from diphtheria. The Dionne Quintuplets were stolen by the Canadian government and displayed like zoo animals for profit. Indian princess Noor Inayat Khan was one of the most successful spies against the Nazis in World War II. A children's television show called Caillou tortured parents for more than a decade . . .

Sh t goes down every single day of the year, year after year. Sometimes it's a battle that changes the course of history, other times it's a life-saving medical advancement. Bravery is counter-balanced with cowardice. There is slavery and there is self-sacrifice. History is replete with deeds both noble and despicable. Some were motivated by greed, others generosity. Many dedicated themselves to the art of killing, while others focused their efforts on curing. There have been grave mistakes and moments of greatness. Confrontation and cooperation.

Early in the twentieth century Spanish philosopher George Santayana wrote, "Those who cannot remember the past are condemned to repeat it." But history serves not just as a warning; it also offers encouragement. Humanity is not endless suck. There is inspiration to be found amidst the atrocities.

On This Day in History Sh t Went Down will significantly expand your knowledge of world history in the most hilarious and profane way possible.