Disconnected from Death: The Evolution of Funerary Customs and the Unmasking of Death in America (Paperback) 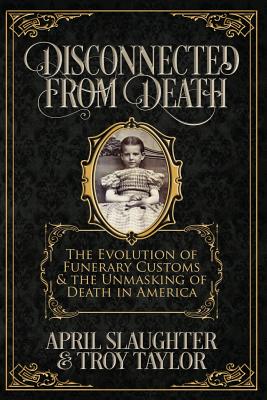 Americans have a complicated history with death - that final darkness at the end of life. Our ancestors dealt with death on a daily basis, dreaming up countless traditions and rituals to try and understand it. Society today, however, has disconnected from death. In years past, Americans died at home. Bodies were prepared for burial in our kitchens and funerals were held for our dead in the parlor. Now, we die under the sterile conditions of a hospital, far removed from the people who love us, and our death has become a business.

From the God-fearing Puritans to the aftermath of the Civil War, the Victorian descent into mourning to modern day funeral traditions, authors April Slaughter and Troy Taylor take the reader along on a journey through America's history with death, dying, and how they've shaped our society today. This is not a book about religion, or what happens to us after we die. This is a book that tries to connect our modern lives to the lives of those who had more than a passing acquaintance with death. Far too often, the traditions and rituals of the past have been presented as "spooky" or "strange" and, while some of them were unusual, all of them served a purpose. No matter how bizarre they might seem, they managed to present a vivid portrait of how we are all connected to death.

Death is - and always will be - a part of life and we hope this book will shed some light on the funeral customs, practices, and traditions of the past and how they have been changed, softened, and sterilized to make death seem like a distant stranger. Death was once a familial responsibility - a reality modern day American funeral directors would have you forget - but how did we become a nation so heavily dependent on them? What other options do we have? The answer is far more than you might have expected.

We may not be as close to death as our ancestors were, but we can assure you that it's still with us, waiting to take us by the hand and lead us into the unknown.