The Selected Works of Jack London, Vol. 02 (of 13): Burning Daylight; The Red One; The night-born; The Strength of the Strong (Paperback) 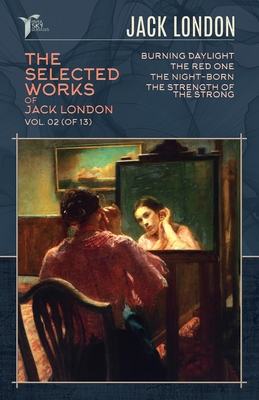 Burning Daylight is a novel by Jack London, published in 1910, which was one of the best-selling books of that year and it was London's best-selling book in his lifetime. The novel takes place in the Yukon Territory in 1893. The main character, nicknamed "Burning Daylight" was the most successful entrepreneur of the Alaskan Gold Rush. The story of the main character was partially based upon the life of Oakland entrepreneur "Borax" Smith. The novel was subsequently filmed as a First National movie starring Milton Sills with Doris Kenyon.

The story is told from the perspective of a scientist called Bassett, who is on an expedition in the jungle of Guadalcanal to collect butterflies. The "Red One" of the title refers to a giant red sphere, of apparently extraterrestrial origin, that the headhunting natives worship as their god and to which they perform human sacrifices. Bassett becomes obsessed with the Red One and in the end is sacrificed himself.

The story's theme was suggested to London by his friend George Sterling: a message is sent from an alien civilization but is lost in the wilderness. There are parallels to Joseph Conrad's short novel Heart of Darkness.