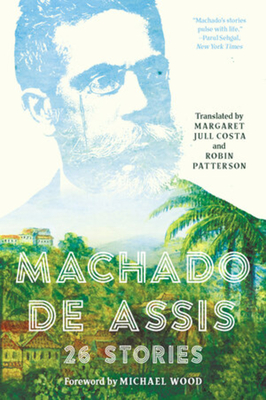 Widely acclaimed as “the greatest writer ever produced in Latin America” (Susan Sontag), as well as “another Kafka” (Allen Ginsberg), Machado de Assis (1839–1908) was famous in his time for his psychologically probing tales of fin-de-siecle Rio de Janeiro—a world populated with dissolute plutocrats, grasping parvenus, and struggling spinsters. In this original paperback, Margaret Jull Costa and Robin Patterson, “the accomplished duo” (Wall Street Journal) behind the “landmark . . . heroically translated” volume (The New Yorker) of the Collected Stories of Machado de Assis, include twenty-six chronologically ordered stories from the seven story collections published during Machado’s life—featuring all-time favorites such as the celebrated novella “The Alienist”; the tragicomic “parable of bureaucracy, madness, and power” (Los Angeles Review of Books), “Midnight Mass”; “The Cane”; and “Father Against Mother.” Ultimately, Machado de Assis: 26 Stories affirms Machado’s status as a literary giant who must finally be fully integrated into the world literary canon.

Machado De Assis (1839–1908) was born in Rio de Janeiro, Brazil. He is the groundbreaking author of such works as Quincas Borba, Dom Casmurro, as well as The Collected Stories of Machado de Assis.

Perhaps the most hopeful book to appear in 2018.... an enormous, gorgeously designed story omnibus from the eternal optimists at Liveright Publishing.... Given a fresh translation by the accomplished duo of Margaret Jull Costa and Robin Patterson, [these] stories move among a bewildering range of traditions.... [A] watershed collection.”
— Sam Sacks, Wall Street Journal

For the first time, the short stories of this 19th-century Brazilian master have been collected and translated into English, allowing the reader to trace the arc of Machado’s career, from the straightforward early love stories to the postmodern later works. Certain preoccupations persist: alluring widows, naive young men, a fondness for coincidence. Above all looms the figure of the bibliomane. 'This is my family,' one says, pointing to his bookshelf. Like his characters, Machado was a creature of literature; ink ran in his veins. It is breathtaking to see the development of his style as well as his deep engagement with storytelling all over the world.
— New York Times, "Times Critics' Top Books of 2018"

The Collected Stories reveals the arc of Machado’s career, from the straightforward love stories to the cerebral and unpredictable later works.... [these] stories pulse with life.... To Machado, your identity and the contours of your world are formed not just by your circumstances but by what you think about habitually. You are what you contemplate, so choose wisely. These stories are a spectacular place to start.”

A landmark volume that will be the first place that most Americans encounter [De Assis]…. captures the greatest range of his writing that has ever existed in a single English volume.... Heroically translated by Margaret Jull Costa and Robin Patterson. Machado de Assis is light and fun in a way one seldom expects of authors who end up as statues…. proof that cosmopolitanism comes from reading, not from travel: through books, he knew the whole world.
— Benjamin Moser, The New Yorker

A major literary event… One of the pleasures of reading Machado is to encounter this comedy of detail, of human particulars… There is a worldly hunger in Machado’s writing, an openness to both life and art.... For Machado, literature begets more literature. He delights in playing with form and narrative; in this volume there are stories written as lectures, stories written entirely in dialogue, and stories in which literary theory itself is mocked.
— Morten Hoi Jensen, Los Angeles Review of Books