That Time I Loved You: Stories (Hardcover) 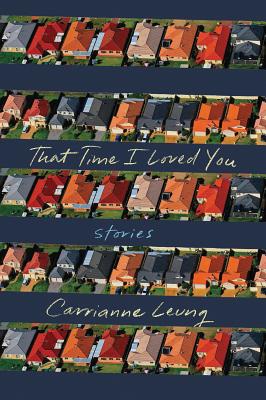 By Carrianne Leung
$24.95
On Our Shelves Now

An Amazon Best Book of the Month (Literature & Fiction)

In this exquisite American debut, Carrianne Leung evokes the legacies of Cheever and Munro with a haunting depiction of 1970s suburbia.

In her “compact gem of a collection” (Globe & Mail), Carrianne Leung enlivens a singular group of characters sharing a shiny new subdivision in 1970s Toronto. Marilyn greets new neighbors with fresh-baked cookies before she starts stealing from them. Stay-at-home-wife Francesca believes passion is just one yard away, only in the arms of another man. And Darren doesn’t understand why his mother insists he keep his head down, even though he gets good grades like his white friends. When a series of inexplicable suicides begin to haunt their community, no one is more fascinated by the terrible phenomenon than young June. The daughter of Chinese immigrants, she sits hawk-eyed at the center, bearing witness to the truth behind pulled curtains: the affairs, the racism, the hidden abuses.

Leung bursts onto the American literary stage with prose remarkably attuned to the tenuous, and perhaps deceptive, idea of happiness among these picket-fenced lives.

Carrianne Leung’s first novel, The Wondrous Woo, was a finalist for the 2014 City of Toronto Book Award. She holds a PhD in sociology and equity studies from OISE/University of Toronto and lives in Toronto.

Heartbreaking.... Leung's stories lift the veiled curtain of late 1970s suburbia to reveal the sadness and isolation of its residents.... Written in the tradition of Alice Munro and Jhumpa Lahiri, Leung's debut story collection marks the career of a writer to watch.
— Kirkus Reviews [starred review]

Though each story in That Time I Loved You can stand alone, they are cleverly interconnected.... The effect mirrors subtly yet precisely the feeling of living in a close suburban neighborhood: that of lives stacked atop one another, entirely separate and walled off and yet closely intertwined by both proximity and culture.

Leung, author of Toronto Book Award–finalist The Wondrous Woo (2014), walks readers through the matching split-levels of a Toronto suburb in her striking U.S. debut.... Readers peer through chain-link fences and discretely pulled curtains along with Leung's vivid, quotable characters—and are reminded that life doesn't happen between soap-opera episodes, cigarettes smoked at the kitchen sink, and trips to the mall, but during them.

If you think Updike and Cheever have a monopoly on the familial and cultural quakings of 1970s suburbia, Carrianne Leung is about to complicate and enrich that picture. Here are expertly confected stories about what families and neighbors unleash upon one another in a milieu too raw for contentment but too beauteous to abandon.
— William Giraldi, author of Hold the Dark and American Audacity

Leung (The Wondrous Woo) presents 10 sweet, sad, sympathetic stories set up in Scarborough, Ontario, for a group portrait of immigrants, misfits, adults, adolescents, and teenagers, all of whom discover suburban comfort does not ensure happiness.... Crystalline prose, sharp storytelling, and pitch-perfect narration enhance Leung’s accessible and affecting depiction of how cruelty undermines and kindness fortifies people’s sense of community.