Runner's World Race Everything: How to Conquer Any Race at Any Distance in Any Environment and Have Fun Doing It (Paperback) 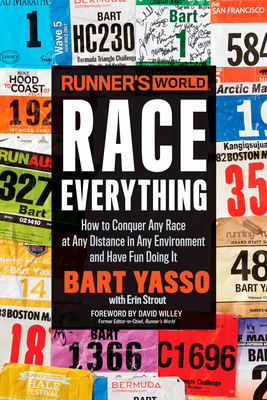 How to be prepared no matter where running might take you

Millions of runners around the US are interested in special experiences, whether it means running a bucket-list event like the Boston Marathon, or competing in beautiful and challenging locales such as Rome or Death Valley. Whatever race you choose, there is no one better to guide you on your journey than Bart Yasso, chief running officer at Runner’s World magazine. Over the past 40 years, Yasso has run more than 1,000 races, across all seven continents, at every conceivable distance, from local 5Ks to grueling ultramarathons and Ironman triathlons. He’s truly done it all, and in Race Everything, he shares the secrets of how he trained, the particularities of each course, and the specific insights he has gleaned to help you run your best no matter the distance.

This book offers tried-and-true advice on how to train and what to do on race day to make the best use of your training. It provides everything you need to know to succeed at the most popular race distances, including general training principles, targeted training plans for beginners and experienced runners alike, and insider tips based on Yasso’s own experiences and those of other top runners he has known and run with. The goal is to inform and inspire runners eager to challenge themselves by tackling the world’s signature races. You will also learn Yasso’s methods for winning the greatest race of all, longevity, so that you can remain healthy, fit, and able to race for decades to come.

Whether your goal is to complete a 5K or 10K race in your hometown or conquer the Antarctica Marathon, Runner's World Race Everything will be your guide.

Bart Yasso is Chief Running Officer for Runner’s World and one of the most beloved figures in the sport. Affectionately dubbed the “Mayor of Running,” Bart is the public face of Runner’s World at races in the United States and abroad. Bart has been with Runner’s World since 1987, and has been instrumental in growing what was once a very small race sponsorship program to one that has linked the brand with thousands of races and millions of runners.

Erin Strout is a contributing editor at Runner’s World and former senior editor at Running Times. Since 2013, she has covered the top levels of the sport, from the Boston Marathon to the Rio Olympics, for the Runner’s World Newswire. As a freelance writer and editor with 20 years of journalism experience, Erin has also contributed to leading health and fitness publications and is a former staff reporter for The Chronicle of Higher Education, where she covered philanthropy and also wrote in-depth pieces concerning NCAA sports and campus health. An avid runner, Erin lives in Flagstaff, Arizona.