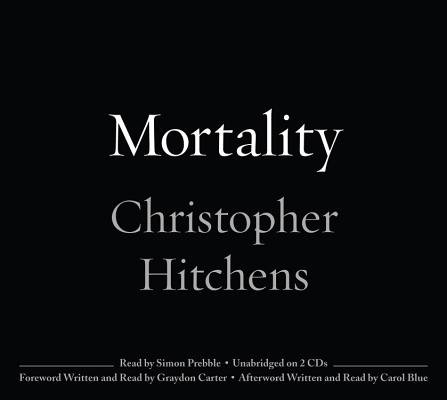 On June 8, 2010, while on a book tour for his bestselling memoir, Hitch-22, Christopher Hitchens was stricken in his New York hotel room with excruciating pain in his chest and thorax. As he would later write in the first of a series of award-winning columns for Vanity Fair, he suddenly found himself being deported "from the country of the well across the stark frontier that marks off the land of malady." Over the next eighteen months, until his death in Houston on December 15, 2011, he wrote constantly and brilliantly on politics and culture, astonishing readers with his capacity for superior work even in extremis.

Throughout the course of his ordeal battling esophageal cancer, Hitchens adamantly and bravely refused the solace of religion, preferring to confront death with both eyes open. In this riveting account of his affliction, Hitchens poignantly describes the torments of illness, discusses its taboos, and explores how disease transforms experience and changes our relationship to the world around us. By turns personal and philosophical, Hitchens embraces the full panoply of human emotions as cancer invades his body and compels him to grapple with the enigma of death.

Mortality is the exemplary story of one man's refusal to cower in the face of the unknown, as well as a searching look at the human predicament. Crisp and vivid, veined throughout with penetrating intelligence, Hitchens's testament is a courageous and lucid work of literature, an affirmation of the dignity and worth of man.

Christopher Hitchens was a contributing editor to Vanity Fair,Slate, and the Atlantic, and the author of numerous books, including works on Thomas Jefferson, Thomas Paine, and George Orwell. He also wrote the international bestsellers god Is Not Great: How Religion Poisons Everything, Hitch-22: A Memoir, and Arguably. He died in December 2011.

"Nothing sharpened Christopher Hitchens' mind like Cancer. He wrote the best, most piercing, most clarifying prose of his career as he faced down the specter of his own demise. As he dealt with fatigue and nausea, with the anger, disgust and frustration that must accompany what he knew was a death sentence, Hitch poured it all into words as painfully honest as they were hilarious."—Sharon Waxman, TheWrap.com

"Among the many things that made Hitchens unique was his precision of thought and expression. What made him rare were his courage and tenacity. He was fearless in the field and relentless in his defense of the defenseless with that mightiest of swords--his pen. Judging from his final essays, he was also fearless in the fact of death."—Kathleen Parker, The Washington Post

"I have no doubt that Christopher Hitchens will have an afterlife. As one of the most original and provocative writers of his generation, his words will continue to mesmerize, incite, confound, and entertain."—Rabbi Shmuley Boteach, FoxNews.com

"His unworldly fluency never deserted him, his commitment was passionate, and he never deserted his trade. He was the consummate writer, the brilliant friend. In Walter Pater's famous phrase, he burned 'with this hard gem-like flame.'Right the the end."—Ian McEwan

"A seeker of truth to the end, and a deservedly legendary witness against the hypocrisy of the ever-sactimonious establishment. What zeal this man had to eviscerate the conceits of the powerful, whether their authority derived from wealth, the state, or a claim to the ear of the divine."—Robert Scheer, TruthDig

"Reading and responding to the Hitch is ceaselessly inspiring and seldom less than exhilarating. More, it is an instigatory experience: it compels you to get involved more deeply with the world around and inside you. Reading any worthwhile writer is an act of celebration, a shared reaction to the act of creation. More, it is an exercise in how to write, read, think and live."—PopMatters.com