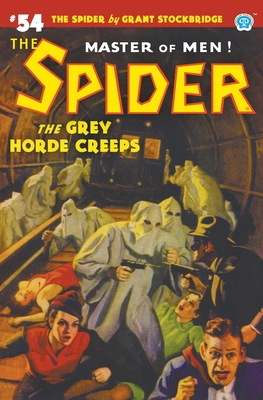 This is book number 54 in the Spider series.

Down from the bleak Kentucky hills swept the stark-naked mob of murder-maddened Blancos-sacking and slaying as they came Neither steel nor bullet could stem that terror-tide of man-made albino monsters, whipped to a frenzy of lust by their criminal chief. Eastward they crept until New York, itself, was at their mercy, and human victims, bloodied and outraged, lay in their path. Once again Richard Wentworth, in the Spider's disguise of doom, fought alone to wipe out crime's crowning horror and save mankind from death