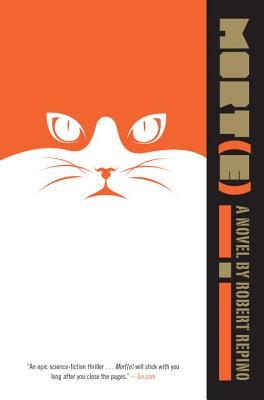 This is book number 1 in the War with No Name series.

After the “war with no name” a cat assassin searches for his lost love in Repino’s strange, moving sci-fi epic that channels both Homeward Bound and A Canticle for Lebowitz.

The “war with no name” has begun, with human extinction as its goal. The instigator of this war is the Colony, a race of intelligent ants who, for thousands of years, have been silently building an army that would forever eradicate the destructive, oppressive humans. Under the Colony's watchful eye, this utopia will be free of the humans' penchant for violence, exploitation and religious superstition. As a final step in the war effort, the Colony uses its strange technology to transform the surface animals into high-functioning two-legged beings who rise up to kill their masters.

Former housecat turned war hero, Mort(e) is famous for taking on the most dangerous missions and fighting the dreaded human bio-weapon EMSAH. But the true motivation behind his recklessness is his ongoing search for a pre-transformation friend—a dog named Sheba. When he receives a mysterious message from the dwindling human resistance claiming Sheba is alive, he begins a journey that will take him from the remaining human strongholds to the heart of the Colony, where he will discover the source of EMSAH and the ultimate fate of all of earth's creatures.

Robert Repino grew up in Drexel Hill, Pennsylvania. After serving in the Peace Corps, he earned an MFA in Creative Writing from Emerson College. His fiction has appeared in The Literary Review, Night Train, Hobart, The Coachella Review, and more. He lives in New York and works as an editor for Oxford University Press.

“Mort(e) catapults the reader into a wild, apocalyptic world . . . [Mort(e)’s] journey, set against the backdrop of an ideological war between pure rationality and mysticism, makes for a strangely moving story.”
—The Washington Post

“With poignant flashes of a morality tale, this debut novel makes us rethink our relationship to all of Earth’s creatures (since they may someday turn on us).”
—Time Out New York

"Marvelously droll . . . This novel is all kinds of crazy, but it wears its crazy so well."
—Slate

“Mort(e) is funny, smart, well-written; it’s already among the better debuts of the year.”
—Flavorwire

"An epic science-fiction thriller . . . Mort(e) will stick with you long after you close the pages."
—Tor.com

“In Repino’s capable hands, Mort(e) is entertaining and intelligent science fiction that can be read as an adventure fantasy, but goes much deeper than that.”
—The Missourian

“What unfolds is told in a sarcastic and sometimes caustic style by a young writer of promising talent—by which I mean, a talent that is promised on the first page and then, after a series of ant mythologies, feline war tragedies, and inter-species friendships, firmly established by the end.”
—The Rumpus

“Dealing with matters of dominance, loyalty, destiny, and justice, this engaging novel might have taken as its epigraph Alexander Pope’s famous couplet, “I am his Highness’ dog at Kew; / Pray tell me, sir, whose dog are you?” In the life of an uplifted cat, the reader sees his or her own quandary as a creature suspended uncomfortably halfway between nescience and angelic wisdom. [T]hought-provoking and tragedy-laden . . . Completely poignant and satisfying.”
—Barnes & Noble Review

“[A] delightful mix of alien invasion and Orwellian parable.”
—KQED.org

"This is science fiction at its best. Repino gives us a wild, imaginative and wholly original tale without any trace of sugar-coating. He takes our current war-addled, religion-dominated, decidedly divided society to task."
—LitReactor

"Repino has a knack for seeing life through non-human eyes."
—Open Letters Monthly

“Absolutely incredible . . . The apocalypse has never, ever been this entertaining."
—BookRiot

"We get all the genres on the color wheel mixed together, but instead of producing a single black, we get a brilliant prism of varying hues and saturation."
—Pixelated

"This is the brilliance of Mort(e) as a novel. There are parts that make you think, that lend courage to ask questions against the grain. It touches on things like morphic resonance theory. It sneaks in observations similar of linguists like Noam Chomsky, who claims language learned by small children takes place so fast that it can’t be explained in terms of imitation alone; that the structure of language must be inhereted in some way. But by no means is his story didactic. Yes, it will compel the lending of a greater kindness to pets, ants, pigeons, whatever."
—Fanzine

"If you’re looking for something a little different, Mort(e) will deliver."
—GeekDad.com

“Devilishly entertaining . . . awfully good . . . a wild riff on interspecies warfare sure to make pet owners think twice the next time their tabby cat darts by. Imagine W. Bruce Cameron's silly and maudlin A Dog's Purpose recast as a violent and frightening post-apocalyptic global battle for the souls of Earth's survivors, layered with a messiah prophecy that makes The Matrix look simplistic by comparison.”
—Kirkus Reviews

"Animal Farm set in a postapocalyptic world based on interspecies rivalry rather than communism, with a little religion on the side, this imaginative story can be taken as a somewhat satirical examination of the role of the individual in society. Highly recommended."
—Library Journal

“After a fantastical leap into an apocalypse of sentient animals, Mort(e) never looks back. Read this novel and you will never look at your pet the same way again."
—Daniel H. Wilson, author of Robopocalypse and Robogenesis

"A beast of a novel that exposes just how beastly we humans really are. Robert Repino's Mort(e) is smart, engaging, and kick-ass."
—Ismet Prcic, author of Shards

"That a novel about the war between ants and humans with house pets as warriors would be so stunningly believable and, above all, affecting, is a testament to what a wonderful book Robert Repino has written. Mort(e) is one of the craziest, most inventive novels I've read in a long time."
—James Scott, author of The Kept

"In our age of first person diary-like-entry novels, Mort(e) is both stunningly original and wonderfully heartfelt. It's a wild ride of a book from a skilled writer I will now be following."
—Shane Jones, author of Light Boxes and Crystal Eaters

"Mort(e) is wonderful and weird, never saccharine and always startling."
—Cat Rambo, author of Near + Far

"Combining elements of Orwellian parable and sci-fi/action thriller, Mort(e) is a tautly constructed indictment of much that is wrong with society, and a celebration of much that is right."
—Matthew Gallaway, author of The Metropolis Case

"Get ready for a post-apocalyptic adventure like no other in this tale of animals being transformed into two legged creatures that rise up to kill their masters. This is all the master plan of intelligent ants that have been building a Colony and plotting for years to start a utopia free of humans. Mort(e) is a former cat turned war hero but his true motivation is searching for his friend, a dog named Sheba. Will the Colony win the war against human violence, exploitation and religious superstitions or will the human bio-weapon EMSAH help all the earth’s creatures?"
—Barbara Theroux, Fact & Fiction (Missoula, MT)