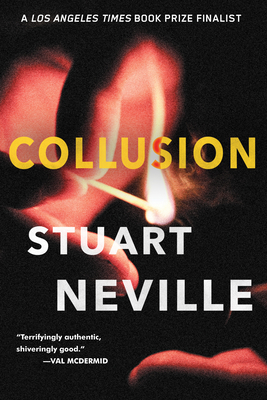 This is book number 2 in the The Belfast Novels series.

A merciless assassin stalks Belfast and Detective Inspector Jack Lennon has been assigned to the case. As Lennon unravels a far-reaching conspiracy involving collusion among Loyalists, IRA members, and law enforcement, he discovers that his estranged former lover and their daughter are in the killer's cross-hairs. To catch the assassin and save the only family he has, Lennon blurs the line between friend and enemy by teaming up with an enigmatic killer named Fegan.

Stuart Neville, the “king of Belfast noir” (The Guardian), is the author of nine novels, for which he has won the  Los Angeles Times Book Prize and been shortlisted for the Edgar, Macavity, Dilys, Barry, and Anthony Awards as well as the CWA Steel Dagger. He lives near Belfast.

“I read this new novel with something bordering on awe. Nobody should be as damn talented as Stuart Neville. Collusion is a magnificent novel.”
—Ken Bruen

“Collusion is that rare beast: a second novel that not only lives up to the promise of the first, but actually exceeds it. Thankfully, it  seems like Stuart Neville is going to be with us for a long time."
—John Connolly

“The violence in Stuart Neville’s novels about Northern Ireland is about as nasty as it gets in noir crime fiction.”
—The New York Times Book Review

“Riveting.... Neville's deft style builds mounting tension, and his characters, all tragic figures, are skillfully developed.... The violence, administered up close and personal—and the rage of those who commit it—is almost operatic. A feast for thriller fans."
—Booklist, Starred Review

“Neville’s sophomore effort is just as well written and just as violent as his debut, winner of the LA Times Book Prize for best crime fiction 2009. Neville creates sympathy for his characters in the midst of violence and betrayal and reveals Northern Ireland as a country still under the effects of decades of terror.”
—Library Journal, Starred Review

“Neville follows his stunning debut, The Ghosts of Belfast, with an even more powerful tale of revenge, violence, and redemption…. Neville rides the perfect Celtic storm in an action-packed, cerebral thriller with fully realized characters and an insider’s view of the ever-shifting politics of Northern Ireland.”
—Publishers Weekly, Starred Review

“Brisk, addictive ... Collusion is a worthy successor to one of last year's best thrillers.”—Guardian

“Neville's follow-up to his corpse-filled debut The Twelve is another mesmerizing Belfast blood bath ... the author's showdowns rival those in Jacobean revenge plays.”
—Sunday Times

“Stuart Neville has a lock on dread.... Full-bodied and credible.... The question Mr. Neville raises with singularly artful drama is whether survival is enough to keep one going. We'll see.”
—Pittsburgh Post-Gazette

“Graphic, gory, gritty and provocative,  Collusion is a wild ride.... Collusion keeps readers on edge until the closing page.... A gripping novel, peppered with a bizarre collection of warped and twisted personalities.”
—Free-Lance Star

“Neville’s way with tension is only matched by his skill at action scenes.”
—Spinetingler Magazine

“If you by chance have never read Stuart Neville’s Belfast Trilogy, it’s time to redeem yourself.”
—Grift Magazine

“Packed with historical and psychological detail.... [Neville] methodically builds suspense, moving his characters into position like chessboard pawns until they converge in a cataclysmic struggle.”
—Suspense Magazine