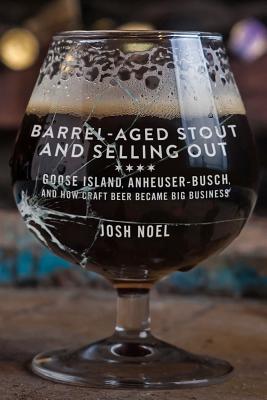 Goose Island opened as a family-owned Chicago brewpub in the late 1980s, and it soon became one of the most inventive breweries in the world. In the golden age of light, bland and cheap beers, John Hall and his son Greg brought European flavors to America. With distribution in two dozen states, two brewpubs and status as one of the 20 biggest breweries in the United States, Goose Island became an American success story and was a champion of craft beer. Then, on March 28, 2011, the Halls sold the brewery to Anheuser-Busch InBev, maker of Budweiser, the least craft-like beer imaginable. The sale forced the industry to reckon with craft beer’s mainstream appeal and a popularity few envisioned. Josh Noel broke the news of the sale in the Chicago Tribune, and he covered the resulting backlash from Chicagoans and beer fanatics across the country as the discussion escalated into an intellectual craft beer war. Anheuser-Busch has since bought nine other craft breweries, and from among the outcry rises a question that Noel addresses through personal anecdotes from industry leaders: how should a brewery grow?

Josh Noel writes about beer and travel for the Chicago Tribune; he has also contributed to This American Life and to the New York Times and other publications. He has become one of the nation’s most recognizable beer journalists, winning multiple awards from the North American Guild of Beer Writers. He lives in Chicago with his wife and children.

"If you care about great beer and great storytelling, this book is essential reading. Josh Noel gives us a fresh look at a fascinating business, laced with new details, sharply drawn characters, and high stakes. Barrel-Aged Stout and Selling Out is deeply reported and always a delight to read."—Jonathan Eig, author of Ali and Luckiest Man

“Josh Noel has accomplished the very rare trick of telling a fascinating story that reveals the larger world it inhabits—in this case, how craft beer went from underdog to unlikely sensation. This is an essential book for anyone interested in beer, and also a really fun read.” —Jeff Alworth, author of The Beer Bible

“A well-researched and well-written book about the most exciting and dynamic era in America’s commercial beer history since Prohibition. I couldn’t put it down and I shared it with a co-worker as soon as I finished reading it.” —Sam Calagione, founder of Dogfish Head Brewery, author of Brewing Up a Business and Project Extreme Brewing

“A thorough and compelling look at craft beer's wild history and complicated future. As an early brewpub sibling to Goose Island, I can easily say there's a detailed story here worth digging into." —John Hickenlooper, Colorado governor and former owner of Wynkoop Brewing

“Josh Noel deftly details the facts and passions surrounding one of the most contentious defections in craft beer history. Behind it, he shows us the dramatic story of two men—father and son—whose journey from struggling start-up to global beer brand changed both beer menus and industry loyalties in ways that will be talked about for decades to come.” —Ray Daniels, founder of the Cicerone Certification Program and author of Designing Great Beers

“Josh Noel tells the story of Goose Island founder John Hall and his son, Greg, with sympathy and understanding, leaving the reader to decide if it is a triumph for craft brewers, a tragedy for the craft movement, or both.” —Steve Hindy, cofounder of Brooklyn Brewery and author of Beer School

A "briskly written narrative ... (an) accessible introduction to the business of brewing." —Wall Street Journal

“Fans of good beer will enjoy Noel’s explorations, which make for a useful cautionary tale as well.” —Kirkus Reviews

“I also found myself appreciating, as I tucked into the book, that it functions both as a history and as an illuminating look into how the world’s largest beer conglomerate tends to do business...in the course of reading, I was entertained and informed in equal measure.”  —Jim Vorel, Paste


“The book is, beyond its many amazing revelations, quite a page-turner. Because Noel interviewed so many people (107 names are listed, and a note mentions there were additional anonymous sources), there’s real personality throughout.” — Jeff Alworth, Beervana.com

"Noel tells Goose Island’s story through the receipts, the sales numbers, the emails, and the time-stamped text messages, delivering what is, in retrospect, a clear look at big beer’s bungled first attempt to take over craft brewing” and adds “He covers tons of ground, but keeps enough of an eye on the humanity of Goose’s story that his book is more than a novel-length business study.” — Karl Klockars, Chicago magazine

"Noel's book is a must-read for any craft beer fan, beer media personnel and of course anyone in beer —macro or craft." — PorchDrinking.com

"You will better understand the battle for craft beer's soul that began when Goose Island was sold when you close the last page of the book...this is a must-read history for any fan, casual or obsessed, of beer." — The Full Pint

“This is the type of book you get when someone absolutely owns their beat, is a good newspaper reporter, and knows how to weave a tale worth telling.” --Post-Bulletin