Up in Here: Jailing Kids on Chicago's Other Side (Paperback) 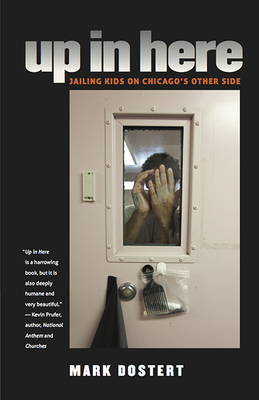 Raised in a comfortable Dallas suburb, Mark Dostert crossed cultural and socioeconomic boundaries as a college student by volunteering as a counselor at the Cook County Juvenile Temporary Detention Center, Chicago’s infamous 500-cell juvenile jail, known locally as the Audy Home. Inmates there had been indicted on first-degree murder, rape, and carjacking charges, yet some enthusiastically met with him for weekly Bible-based lessons and discussions. Dostert formed friendly relationships with his students and envisioned becoming an even closer mentor to the legally troubled boys when he became an employee there after graduating from college.

The juveniles’ attitudes toward Dostert change, however, once he begins working as a “Children’s Attendant” at the Audy Home, clocking in for eight hours every day to enforce rules and maintain order on the cellblocks. His colorblind, altruistic volunteer world fractures into a full-time, emotionally charged reality of white and black and brown. When the boys change, he must change too. Despite wanting to help them feel human in such a dehumanizing environment, Dostert realizes he needs to make sure his kindness is not perceived as weakness. Dostert learns to march the juveniles through the facility to school, recreation activities, and chapel. He must strip-search them, interrupt their brawls, root through their cells for drugs and handcrafted weapons, and monitor group showers to thwart sexual extortion and the inscription of gang symbols in soap on walls and mirrors. Week after week and month after month, the job exposes hidden views not only of the juveniles and the “system” incarcerating them, but of Children’s Attendant Dostert himself.

From one man’s struggle to reconcile his humanitarian intentions with his actual job responsibilities in what, to him, is a strange new world, emerges a sincere effort to confront the realities of America’s persisting racial tensions and institutionalized poverty. Dostert’s story is an honest and unflinching journey from thinking he has many of the answers for how to change this world to discovering how little he really knows about the world he is trying to change.

“Mark Dostert’s Up in Here is a fine book in the spirit of Ted Conover’s Newjack. Dostert, who writes heartbreaking sketches of his juvenile charges, charts his evolution as a ‘children’s attendant’ in Chicago’s Audy Home, brightly illuminating the irony of a correctional system that too often shapes all connected to it for the worse.”—Alexander Parsons, author, Leaving Disneyland and In the Shadows of the Sun


“Americans watch news reports and reality TV shows about Chicago's hard streets and wonder how these tragedies happen. If you want to understand more, if you want to hear the beating heart, the laments, and the hopes of children at the epicenter of these tales, you must read Mark Dostert's haunting book.”—Luis Alberto Urrea, author, The Devil’s Highway, a finalist for the Pulitzer Prize


“Utterly unprepared for the Hobbesian world he encounters at Chicago’s juvenile jail, Mark Dostert soon realizes that any hesitation or uncertainty on his part could let all hell break loose. Up in Here is the ruthlessly honest and touching story of his struggle to become the essential male authority that he needs to keep himself and the boys safe. Repeatedly, he fails. With admirable candor, he details the humiliations he suffers. Where is this elusive manhood? In the end, mysteriously and with some triumph, he begins to find it.”—Emily Fox Gordon, author, Mockingbird Years: A Life in and out of Therapy and Book of Days

“Although Mark Dostert writes vividly of the gangs, brawls, and sadnesses of children who enter incarceration lost and without hope (and the staff who must cope with them every day), it is his moral sense, his unsentimental view into their underlying humanity and the system that keeps them locked inside, that is truly memorable. The violently unsettled yet sometimes bored Audy Home inmates become for Children’s Attendant Dostert sources of empathy, frustration, kindness, and a complex reflection on justice, race, and the public good. Sure, Up in Here is a harrowing book, but it is also deeply humane and very beautiful.”—Kevin Prufer, author, National Anthem and Churches


“In a bracing debut memoir, essayist Dostert chronicles his time working as a guard at the Audy Home, a detention center in Cook County, IL, which houses teenagers waiting to be tried for crimes like murder and rape. We learn about the center’s racial dynamics (one kid lectures Dostert on the obligations that accrue to white Dostert because of the history of slavery), how to identify symptoms of suicidality, and the proper procedure for strip-searches. The stories Dostert tells speak for themselves; the book is blessedly free of moralizing. When Dostert does want to deliver shocking facts about the juvenile criminal justice system, he works them into narrative.”—Publishers Weekly

Chosen as one of the "Best Books of 2014"—Houston Chronicle