What Brothers Do (Paperback) 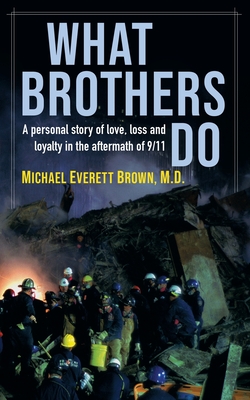 What Brothers Do pulls readers not just through the trenches and ashes of Ground Zero after the fall of the Twin Towers, it draws us through the broken heart of Michael Brown, a brother who feels the loos, dread, fear--and hope--of finding his brother, Captain Patrick Brown, alive.

"Paddy" Brown would surely survive--he was an FDNY superman--not even the devastation of the 9/11 terrorist attack would stop him Could his heroism rise above evil?

Keeping the memory of Captain Patrick Brown--a true American hero and U.S. Marine--alive is Michael Brown's quest. Paddy Brown was loved, revered and respected by everyone who felt his strength, sincerity and sense of purpose. His story, as experienced by his brother, brings life not just to his memory, but also to his irrefutable spirit as a man--one of 343 fire fighters and hundreds of first responders--who lived to serve and protect, yet perished, trying to save the lives of thousands of fellow New Yorkers.

What Brothers Do follows the journey of the Brown brothers as one traces the life of a fallen icon and in the process, recreates his own. We stand in awe of the life of Paddy Brown and stand by his brother who knew only that he had to go find him. In doing so, he found pain but also loyalty and love and wrote the best book about 9/11. Add What Brothers Do to your library to complete your journey from the 9/11 terrorist attacks on the World Trade Center.