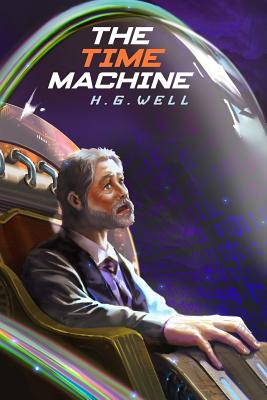 "We should strive to welcome change and challenges, because they are what help us grow. With out them we grow weak like the Eloi in comfort and security. We need to constantly be challenging ourselves in order to strengthen our character and increase our intelligence. "
--- H.G. Wells, The Time Machine The Time Machine is a science fiction novel by H. G. Wells, published in 1895. Wells is generally credited with the popularization of the concept of time travel by using a vehicle that allows an operator to travel purposely and selectively forwards or backwards in time. The term "time machine", coined by Wells, is now almost universally used to refer to such a vehicle (Also see "the anacronopete"). The Time Machine has since been adapted into three feature films of the same name, as well as two television versions, and a large number of comic book adaptations. It has also indirectly inspired many more works of fiction in many media.

H. G. Wells Herbert George Wells (21 September 1866 - 13 August 1946), known primarily as H. G. Wells, was a prolific English writer in many genres, including the novel, history, politics, and social commentary, and textbooks and rules for war games. Wells is now best remembered for his science fiction novels, and is called the father of science fiction, along with Jules Verne and Hugo Gernsback. His most notable science fiction works include The Time Machine (1895), The Island of Doctor Moreau (1896), The Invisible Man (1897), and The War of the Worlds (1898). He was nominated for the Nobel Prize in Literature in four different years. Wells's earliest specialized training was in biology, and his thinking on ethical matters took place in a specifically and fundamentally Darwinian context. He was also from an early date an outspoken socialist, often (but not always, as at the beginning of the First World War) sympathising with pacifist views. His later works became increasingly political and didactic, and he wrote little science fiction, while he sometimes indicated on official documents that his profession was that of journalist. Novels like Kipps and The History of Mr Polly, which describe lower-middle-class life, led to the suggestion, when they were published, that he was a worthy successor to Charles Dickens, but Wells described a range of social strata and even attempted, in Tono-Bungay (1909), a diagnosis of English society as a whole. A diabetic, in 1934 Wells co-founded the charity The Diabetic Association (known today as Diabetes UK).