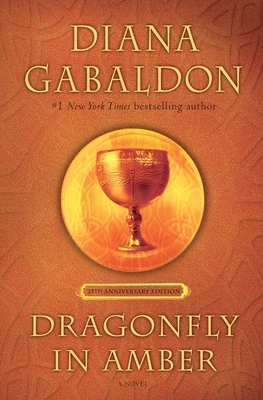 This is book number 2 in the Outlander series.

A beautifully designed collector’s edition of the second book in Diana Gabaldon’s blockbuster Outlander saga (now a Starz original series), featuring a new introduction by the author and a reader’s group guide

A quarter century ago, Diana Gabaldon followed up her classic novel Outlander with a powerful sequel that reunited fans with her unforgettable characters—eighteenth-century Scotsman Jamie Fraser and his time-traveling wife, Claire Randall. In celebration of the series that has captured the imagination of millions and inspired the acclaimed television drama, here is a special twenty-fifth-anniversary edition.

For twenty years, Claire Randall has kept her secrets. But now she is returning with her grown daughter to the mysteries of Scotland’s mist-shrouded Highlands.

Here Claire plans to reveal a truth as shocking as the events that gave it birth: the secret of an ancient circle of standing stones, the secret of a love that transcends centuries, and the truth of a man named Jamie Fraser—a Highland warrior whose gallantry once drew the young Claire from the security of her century to the dangers of his.

Claire’s spellbinding journey continues through the intrigue-ridden French court and the menace of Jacobite plots to the Highlands of Scotland, through war and death, in a desperate fight to save both the child and the man she loves.

Diana Gabaldon is the #1 New York Times bestselling author of the wildly popular Outlander novels—Outlander, Dragonfly in Amber, Voyager, Drums of Autumn, The Fiery Cross, A Breath of Snow and Ashes (for which she won a Quill Award and the Corine International Book Prize), An Echo in the Bone, and Written in My Own Heart’s Blood—as well as a collection of Outlander fiction, Seven Stones to Stand or Fall; the related Lord John Grey books Lord John and the Private Matter, Lord John and the Brotherhood of the Blade, Lord John and the Hand of Devils, and The Scottish Prisoner; two works of nonfiction, The Outlandish Companion, Volumes 1 and 2; the Outlander graphic novel, The Exile; and The Official Outlander Coloring Book. She lives in Scottsdale, Arizona, with her husband.