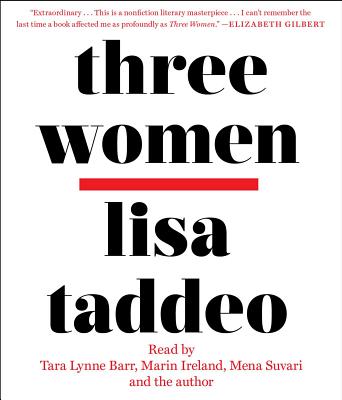 Taddeo's astonishing book is a work of nonfiction; she spent 8 years immersed in the lives of three real women, chronicling their sex lives and exploring the ups and downs of their desire. And the resulting book is as much a page-turner as any psychological drama could ever be. Lina is a Midwestern housewife having a torrid affair with an old fling. Sloane is a successful restaurant owner in an open marriage(well, sort of). And Maggie can't escape the relationship she had with a teacher in high school. Their stories are vivid, intimate and completely riveting.

“I can’t recall the last time I’ve been reading a work of nonfiction and woken up excited purely by the fact that, today, I would get to read more. Compulsive and psychologically riveting, Three Women reads like a novel. I couldn’t keep from dog-earing its pages each time Taddeo perfectly expressed something I’d felt but never had the words for. In Sloane, Maggie, and Lina, I recognized aspects of myself — namely the desire for connection and for love. When three women tell their uncensored truth, they can liberate a nation. I feel deeply grateful to Lisa Taddeo for giving us this gift of raw authenticity.”
— Michaela Carter, Peregrine Book Company, Prescott, AZ

“Three Women is one of the most compelling nonfiction books I have ever read. Taddeo crafts this book in such a way that you feel like you’re hearing these unique stories from a friend over a glass of wine. An intimate look into these women’s lives asks the reader to look into their own life of sensuality, relationships, and trauma—elements often coexisting. She finds a beautiful humanity in that tangled mess of natural desire and what we hide within ourselves.”
— Jenna Soltesz, Buxton Books, Charleston, SC

“A breathtaking and important book…What a fine thing it is to be enthralled by another writer’s sentences. To be stunned by her intellect and heart.” —Cheryl Strayed

“Extraordinary...This is a nonfiction literary masterpiece...I can't remember the last time a book affected me as profoundly as Three Women.” —Elizabeth Gilbert

“A revolutionary look at women's desire, this feat of journalism reveals three women who are carnal, brave, and beautifully flawed.” —People (Book of the Week)

A riveting true story about the sex lives of three real American women, based on nearly a decade of reporting.

Lina, a young mother in suburban Indiana whose marriage has lost its passion, reconnects with an old flame through social media and embarks on an affair that quickly becomes all-consuming. Maggie, a seventeen-year-old high school student in North Dakota, allegedly engages in a relationship with her married English teacher; the ensuing criminal trial turns their quiet community upside down. Sloane, a successful restaurant owner in an exclusive enclave of the Northeast, is happily married to a man who likes to watch her have sex with other men and women.

Hailed as “a dazzling achievement” (Los Angeles Times) and “a riveting page-turner that explores desire, heartbreak, and infatuation in all its messy, complicated nuance” (The Washington Post), Lisa Taddeo’s Three Women has captivated readers, booksellers, and critics—and topped bestseller lists—worldwide. Based on eight years of immersive research, it is “an astonishing work of literary reportage” (The Atlantic) that introduces us to three unforgettable women—and one remarkable writer—whose experiences remind us that we are not alone.

Lisa Taddeo is the author of the #1 New York Times bestseller Three Women, which she is adapting as a dramatic series at Showtime, and the novel Animal. She has contributed to The New York Times, New York magazine, Esquire, Elle, Glamour, and many other publications. Her nonfiction has been included in the Best American Sports Writing and Best American Political Writing anthologies, and her short stories have won two Pushcart Prizes. She lives with her husband and daughter in New England.

Lisa Taddeo is the author of the #1 New York Times bestseller Three Women, which she is adapting as a dramatic series at Showtime, and the novel Animal. She has contributed to The New York Times, New York magazine, Esquire, Elle, Glamour, and many other publications. Her nonfiction has been included in the Best American Sports Writing and Best American Political Writing anthologies, and her short stories have won two Pushcart Prizes. She lives with her husband and daughter in New England.

"Author Lisa Taddeo introduces listeners to the true stories of three women and their most intimate and very real sexual desires. Narrator Tara Lynne Barr portrays Maggie in youthful tones that embody her inexperience as she navigates a relationship with her high school teacher. Marin Ireland portrays Lina, starting with an even-toned deadpan delivery and gradually diversifying, a perfect reflection of Lina's journey from a passionless marriage to a flaming affair. Mena Suvari portrays Sloan in a breathy neutral tone that exhibits her willingness to fulfill the sexual desires of others while she figures out what she wants for herself. All the narrators deliver authentic and emotional performances."
— AudioFile Magazine