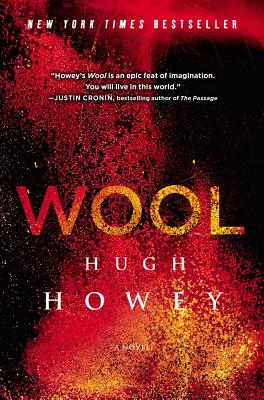 For suspense-filled, post-apocalyptic thrillers, Wool is more than a self-published eBook phenomenon―it’s the new standard in classic science fiction.

In a ruined and toxic future, a community exists in a giant silo underground, hundreds of stories deep. There, men and women live in a society full of regulations they believe are meant to protect them. Sheriff Holston, who has unwaveringly upheld the silo’s rules for years, unexpectedly breaks the greatest taboo of all: He asks to go outside.

His fateful decision unleashes a drastic series of events. An unlikely candidate is appointed to replace him: Juliette, a mechanic with no training in law, whose special knack is fixing machines. Now Juliette is about to be entrusted with fixing her silo, and she will soon learn just how badly her world is broken. The silo is about to confront what its history has only hinted about and its inhabitants have never dared to whisper. Uprising.

A New York Times and USA TODAY bestseller, as well as Kindle Book Review’s 2012 Indie Book of the Year, the self-published eBook blockbuster Wool will now be available in paperback from Simon & Schuster.

Hugh Howey is the author of Wool, a book he wrote while working as a bookseller, writing each morning and during every lunch break for nearly three years. Originally self-published in 2011, Wool has grown into a New York Times bestseller. He now lives in Jupiter, Florida, with his wife Amber and their dog Bella. For more information visit HughHowey.com/wool/.

"WOOL is incredible. This is the best science fiction series I've read in years. Not since A Canticle for Leibowitz have I been so utterly and completely enthralled."
— Douglas Preston, #1 bestselling author of Blasphemy and The Monster of Florence

"Howey's WOOL is an epic feat of imagination. You will live in this world."
— Justin Cronin, bestselling author of THE PASSAGE

“Secrets unfold with just the right pacing… If you're looking for a good post-apocalyptic read, you can't do much better than WOOL."
— Rick Riordan, bestselling author of the Percy Jackson & the Olympians series

"Exilharating, intense, addictive."
— S.J. Watson, bestselling author of BEFORE I GO TO SLEEP

"In WOOL, Hugh Howey delivers the key elements of great science fiction: an authentic and detailed future-world; realistic, relatable characters to live in it; and a taut, thoughtful story. Howey’s supple, muscular writing is the icing on the cake."
— Jonathan Hayes, author of A HARD DEATH