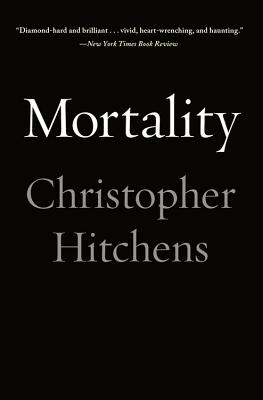 On June 8, 2010, while on a book tour for his bestselling memoir, Hitch-22, Christopher Hitchens was stricken in his New York hotel room with excruciating pain in his chest and thorax. As he would later write in the first of a series of award-winning columns for Vanity Fair, he suddenly found himself being deported "from the country of the well across the stark frontier that marks off the land of malady." Over the next eighteen months, until his death in Houston on December 15, 2011, he wrote constantly and brilliantly on politics and culture, astonishing readers with his capacity for superior work even in extremis.

Throughout the course of his ordeal battling esophageal cancer, Hitchens adamantly and bravely refused the solace of religion, preferring to confront death with both eyes open. In this riveting account of his affliction, Hitchens poignantly describes the torments of illness, discusses its taboos, and explores how disease transforms experience and changes our relationship to the world around us. By turns personal and philosophical, Hitchens embraces the full panoply of human emotions as cancer invades his body and compels him to grapple with the enigma of death.

Mortality is the exemplary story of one man's refusal to cower in the face of the unknown, as well as a searching look at the human predicament. Crisp and vivid, veined throughout with penetrating intelligence, Hitchens's testament is a courageous and lucid work of literature, an affirmation of the dignity and worth of man.

Christopher Hitchens was a contributing editor to Vanity Fair,Slate, and the Atlantic, and the author of numerous books, including works on Thomas Jefferson, Thomas Paine, and George Orwell. He also wrote the international bestsellers god Is Not Great: How Religion Poisons Everything, Hitch-22: A Memoir, and Arguably. He died in December 2011.

"Remarkable . . . The book's power lies in its simplicity, in its straightforward, intelligent documenting, its startling refusal of showiness or melodrama or grandeur....The great polemicist, essayist, conversationalist, provocateur, arguer, has done something extraordinary in this book. He has created yet another style, another mode, another way of being and thinking and dreaming, on his death bed; he has written in many ways an un-Hitchens-like book, eluding proclamations, resolutions, mastery, wit, at-easeness with opinion, in favor of unnerving directness, of harrowing documentation. He has allowed his dismantled confidence, his undoing to breathe, and to live in the pages, in a way that is startling and new and an achievement unlike his others, different in kind, yet equally ambitious and relentlessly honest."—Katie Roiphe, Slate.com

"Like virtually everything he wrote over his long, distinguished career, diamond-hard and brilliant . . .vivid, heart-wrenching and haunting - messages in a bottle tossed from the deck of a sinking ship as its captain, reeling in agony and fighting through the fog of morphine, struggles to keep his engines going . . . a final, defiant, and well-reasoned defense of his non-God-fearingness . . . It is, however, sobering and grief-inducing to read this brave and harrowing account of his 'year of living dyingly' in the grip of an alien that succeeded where none of his debate opponents had in bringing him down."—Christopher Buckley, New York Times Book Review

"This trenchant, sassy, tragically posthumous little black book earns a proud spot on the end-of-life shelf, along with Julian Barnes' Nothing to Be Frightened Of, Joan Didion's The Year of Magical Thinking, Leo Tolstoy's The Death of Ivan Ilyich, Joan Wickersham's The Suicide Index, Saul Bellow's Ravelstein, and Philip Roth's Everyman and Exit Ghost, to name just a few."—NPR.org

"A book driven by his desire to look death squarely in the face and provoked by detractors who were certain he would turn to religion when confronted with it. He did not... [MORTALITY is] full of humility, a humility worthy of kings."—Newsday

"The melancholy irony of 'Mortality' is that it gave our best essayist - I can't think of someone who comes even close - the chance to grapple with the most intractable subject, to wrestle with the angel of death in a battle we will all have to lose at one time or another.....The voice is gone. The words remain."—The New York Daily News

"These essays are brave and fitting final words from a writer at the end of his journey."—Bookpage

"There are no clever pitches to diminish the horror vacui of oblivion. He offers no self-pity or special pleading. The book is tough-minded . . . poignant, but the poignancy is ours, not his."—Wall Street Journal

"Mortality is a crash course in lived philosophy....bracing."—Salon

"Stark and powerful... Hitchens's powerful voice compels us to consider carefully the small measures by which we live every day and to cherish them."—Publisher's Weekly (Starred)

"A jovially combative riposte to anyone who thought that death would silence master controversialist Hitchens."—Kirkus Reviews (Starred)

"Mortality, the final book by Christopher Hitchens, the Anglo-American essayist, reporter, devout atheist and all-around intellectual troublemaker, won't be shelved in the travel section. But in a sense that's where it belongs, along with the best of the literary travel writers. Think George Orwell, one of Hitchens' heroes....Few writers wrote sharper sentences or treated words with more respect."—USA Today, "The 25 Big Books of Fall"

"Unsparingly blunt, rhetorically suave . . . It's rare that someone so powerfully writes of such deep connections between the death of intellectual ability and the decay of the body."—Boston Globe

"To the end, he produces sentences of startling beauty and precision . . . One of our best is gone, yet "Mortality" is a powerful and moving final utterance."—San Francisco Chronicle

"Mortality is not just for Hitchens' fans, but for all.... With almost unimaginable clarity, grace and wit, even for the master wordsmith we had grown used to. We see here a very warm and thoughtful human being. Poignant and deeply personal thoughts on the art of writing and the heartbreak of losing his unmistakable speaking voice during the course of treatment....The furthest thing from grim, Mortality is a gift. Not just from Christopher, but from Carol as well. Do pick it up."—Huffington Post