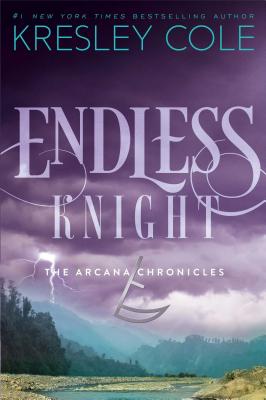 This is book number 2 in the The Arcana Chronicles series.

In this seductive follow-up to Poison Princess, #1 New York Times bestselling author Kresley Cole takes us deeper into the dark world of the Arcana Chronicles.

Evie has fully come into her powers as the Tarot Empress, and Jack was there to see it all. She now knows that the teens who’ve been reincarnated as the Tarot are in the throes of an epic battle. It’s kill or be killed, and the future of mankind hangs in the balance.

With threats lurking around every corner, Evie is forced to trust her newfound alliance. Together they must fight not only other Arcana, but also Bagmen zombies, post-apocalyptic storms, and cannibals.

When Evie meets Death, things get even more complicated. Though falling for Jack, she’s drawn to the dangerous Endless Knight as well. Somehow the Empress and Death share a history, one that Evie can’t remember—but Death can’t forget…

Kresley Cole is the #1 New York Times bestselling author of the Immortals After Dark paranormal series and the young adult Arcana Chronicles. Her books have been translated into over twenty foreign languages, garnered three RITA awards, and consistently appear on the bestseller lists in the US and abroad. Before becoming a writer, Cole was a world-ranked athlete, coach, and graduate student. She has traveled over much of the world and draws from those experiences to create her memorable characters and settings. She lives in Florida with her family and “far too many animals,” and spends any free time traveling. You can learn more about her and her work at KresleyCole.com or Facebook.com/KresleyCole.

“An electrifying mix of page-turning, post-apocalyptic adventure and sizzling romance. The Arcana Chronicles will blow you away!”
— P.C. Cast

“The prose crackles with energy and interest, the content is on target in terms of current demand, and this could be the next Twilight.”
— Booklist

“My brain is near exploding with how crazy good this story was… An exceptionally well written plot that will have you turning pages and sticking up a ‘do not disturb’ sign. You won’t want to be interrupted. Especially when Jackson has his smexi Cajun mojo in full swing.”
— novelsontherun.blogspot.com

“Holy Mother of YA Goodness…did Kresley Cole write a book! I’m still getting the chills thinking about this ‘Poison Princess!’… Jack Deveaux, [is] a swoon-worthy character if ever there was one.”
— parajunkee.com

“Kresley Cole knows how to capture an audience because I was gone from page one.”
— mynotsovacantshelf.blogspot.com

"A juicy cliff-hanger ending will amp up their appetites for further tarot-based adventures."
— Booklist