The Science of God: The Convergence of Scientific and Biblical Wisdom (Paperback) 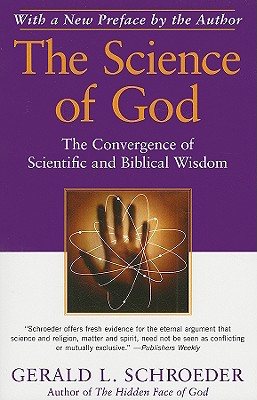 For the readers of The Language of God, another instant classic from "a sophisticated and original scholar" (Kirkus Reviews) that disputes the idea that science is contrary to religion.

In The Science of God, distinguished physicist and Biblical scholar Gerald L. Schroeder demonstrates the surprising parallels between a variety of Biblical teachings and the findings of biochemists, paleontologists, astrophysicists, and quantum physicists. In a brilliant and wide-ranging discussion of key topics that have divided science and religion—free will, the development of the universe, the origin of life, and the origin of man—Schroeder argues that the latest science and a close reading of the Bible are not just compatible but interdependent.

This timely reissue of The Science of God features a brand-new preface by Schroeder and a compelling appendix that addresses the highly publicized experiment in 2008 in which scientists attempted to re-create the chemical composition of the cosmos immediately after the Big Bang. It also details Schroeder’s lucid explanations of complex scientific and religious concepts, such as the theory of relativity, the passage of time, and the definitions of crucial Hebrew words in the Bible. Religious skeptics, Biblical literalists, scientists, students, and physicists alike will be riveted by Schroeder’s remarkable contribution to the raging debate between science and religion.

The author of The Hidden Face of God and Genesis and the Big Bang, Gerald L. Schroeder is an applied theologian with undergraduate and doctoral degrees from the Massachusetts Institute of Technology. His work has been reported in Time, Newsweek, Scientific American, and in leading newspapers around the world. He lives in Jerusalem with his wife and their five children.

"This engaging and humane book advances the dialogue beyond the clichés and stereotypes of which both scientists and religious believers have been guilty." -- Washington Post

"Schroeder offers fresh evidence for the eternal argument that science and religion, matter and spirit, need not be seen as conflicting or mutually exclusive." -- Publishers Weekly