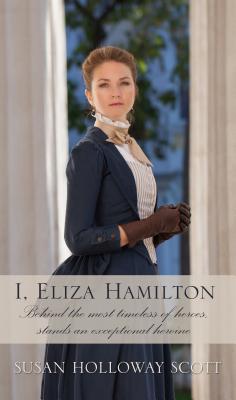 In this beautifully written novel of historical fiction, bestselling author Susan Holloway Scott tells the story of Alexander Hamilton's wife, Eliza--a fascinating, strong-willed heroine in her own right and a key figure in one of the most gripping periods in American history.
"Love is not easy with a man chosen by Fate for greatness . . ."
As the daughter of a respected general, Elizabeth Schuyler is accustomed to socializing with dignitaries and soldiers. But no visitor to her parents' home has affected her so strongly as Alexander Hamilton, a charismatic, ambitious aide to George Washington. They marry quickly, and despite the tumult of the American Revolution, Eliza is confident in her brilliant husband and in her role as his helpmate. But it is in the aftermath of war, as Hamilton becomes one of the country's most important figures, that she truly comes into her own.
In the new capital, Eliza becomes an adored member of society, respected for her fierce devotion to Hamilton as well as her grace. Behind closed doors, she astutely manages their expanding household, and assists her husband with his political writings. Yet some challenges are impossible to prepare for. Through public scandal, betrayal, personal heartbreak, and tragedy, she is tested again and again. In the end, it will be Eliza's indomitable strength that makes her not only Hamilton's most crucial ally in life, but also his most loyal advocate after his death, determined to preserve his legacy while pursuing her own extraordinary path through the nation they helped shape together.

Susan Holloway Scott is the author of over fifty historical novels and historical romances. Writing under several pen names, she has received numerous awards and honors for her bestselling books. With more than three million copies of her books in print, she has been published in nineteen foreign countries around the world and translated into fourteen different languages. Susan also writes as half of the Two Nerdy History Girls (twonerdyhistorygirls.com), a popular book & history blog and Twitter account (@2nerdyhistgirls) with a worldwide following. She is a graduate of Brown University, and lives with her family outside of Philadelphia, PA. For more information about Susan and her books, visit her website at www.susanhollowayscott.com.