How to Tell Toledo from the Night Sky: A Novel (CD-Audio) 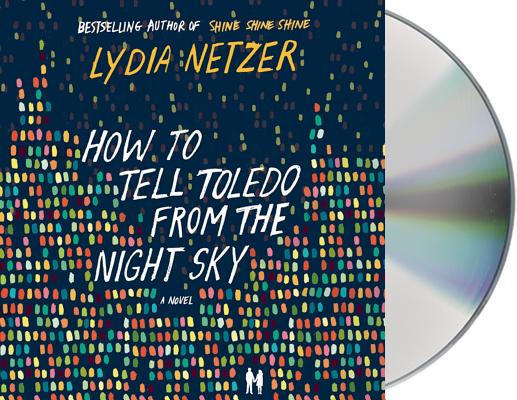 By Lydia Netzer, Joshilyn Jackson (Read by)
Email or call for price.
Out of Print

“This is a quirky, geeky, wonderful, feel-good love story unlike anything you have ever read. It has poetry, black holes, dreams, astronomy, super-colliders, psychics, destiny, unrequited love, and the strangest pre-arranged marriage you will ever see. It goes from weird to serious and from funny to sad, but in the end Netzer's latest is an honest and emotional look at the nature of true love.”
— Nancy McFarlane, Fiction Addiction, Greenville, SC

Beyond the skyline of Toledo stands the Toledo Institute of Astronomy, the nation's premier center of astronomical discovery and a beacon of scientific learning for astronomers far and wide. One of these is George Dermont, a dreamer and a man of deep faith, who's trying to prove the scientific existence of a Gateway to God, and speaks to ancient gods and believes they speak back. Its newest star is Irene Sparks, a pragmatist and mathematician invited to lead the Institute's work on a massive superconductor being constructed below Toledo. This would be a scientist's dream come true, but it's particularly poignant for Irene who has been in self-imposed exile from Toledo and her estranged alcoholic mother, Bernice. When Bernice dies unexpectedly, Irene resolves to return to Toledo, and sets in motion a series of events which place George and Irene on a collision course with love, destiny and fate.

George and Irene were born to be together. Literally. Their mothers, friends since childhood, hatched a plan to get pregnant together, raise the children together and then separate them so as to become each other's soulmates as adults. Can true love exist if engineered from birth?

Lydia Netzer's How to Tell Toledo from the Night Sky is a mind-bending, heart-shattering love story for dreamers and pragmatists alike, exploring the conflicts of fate and determinism, and asking how much of life is under our control and what is pre-ordained in the stars.

LYDIA NETZER lives in Virginia with her husband and two redheaded children. She is the author of How to Tell Toledo from the Night Sky and Shine Shine Shine, a NYT Notable Book and a finalist for the LA Times Book Prize.

“No one writes like the brilliant Lydia Netzer; she’s a visionary with a huge voice and an impeccable ear for language. HOW TO TELL TOLEDO FROM THE NIGHT SKY evokes an Ohio where math has married mysticism, where a woman at war with falling in love can find herself flying into it instead, where a man will fight both his demons and his deities to finally connect. It’s a powerful reinvention of the love story---sometimes heart-wrenching, sometimes glorious, but always truly original.  Compelling, rich with ideas, and perfectly written, it left me breathless. I love this book, and you will, too” —Joshilyn Jackson, New York Times bestselling author of A Grown Up Kind of Pretty