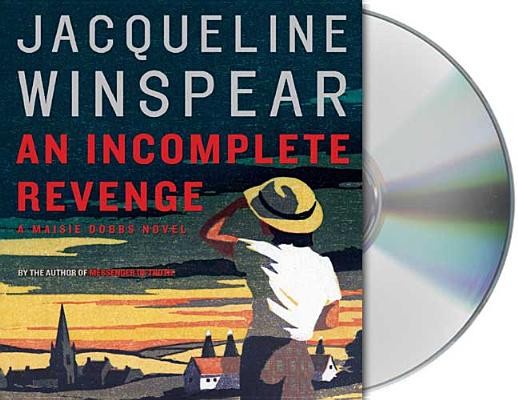 By Jacqueline Winspear, Orlagh Cassidy (Read by)
Email or call for price.
Out of Print

This is book number 5 in the Maisie Dobbs Novels series.

In her fifth outing, Maisie Dobbs, the extraordinary Psychologist and Investigator, delves into a strange series of crimes in a small rural community

With the country in the grip of economic malaise, and worried about her business, Maisie Dobbs is relieved to accept an apparently straightforward assignment from an old friend to investigate certain matters concerning a potential land purchase. Her inquiries take her to a picturesque village in Kent during the hop-picking season, but beneath its pastoral surface she finds evidence that something is amiss. Mysterious fires erupt in the village with alarming regularity, and a series of petty crimes suggests a darker criminal element at work. As Maisie discovers, the villagers are bitterly prejudiced against outsiders who flock to Kent at harvest time—even more troubling, they seem possessed by the legacy of a wartime Zeppelin raid. Maisie grows increasingly suspicious of a peculiar secrecy that shrouds the village, and ultimately she must draw on all her finely honed skills of detection to solve one of her most intriguing cases.

Rich with Jacqueline Winspear's trademark period detail, this installment of the bestselling series, An Incomplete Revenge, is gripping, atmospheric, and utterly enthralling.

Jacqueline Winspear is the New York Times bestselling author of the Maisie Dobbs novels. The first in the series, Maisie Dobbs, won the prestigious Agatha Award for Best First novel, the Macavity Award for Best First Novel, and the Alex Award. She won an Agatha for Best Novel for Birds of a Feather and a Sue Feder/Macavity Award for Best Historical Mystery for Pardonable Lies. Winspear was born and raised in the county of Kent in England. Her grandfather had been severely wounded and shell-shocked in World War I, and learning his story sparked her deep interest in the "war to end all wars” and its aftereffects, which would later form the background of her novels. Winspear studied at the University of London's Institute of Education, then worked in academic publishing, in higher education and in marketing communications in the UK. She immigrated to the United States in 1990 and embarked on her life-long dream to be a writer. In addition to her novels, Winspear has written articles for women’s magazines and journals on international education, and she has recorded her essays for public radio. She divides her time between Ojai and the San Francisco Bay Area and is a regular visitor to the United Kingdom and Europe.

Orlagh Cassidy is the winner of the 2009 Best Voice in Children & Family Listening and the 2008 and 2011 Best Voice in Mystery & Suspense. She’s narrated for Jacqueline Winspear, James Patterson, Erica Spindler, Beth Harbison, and Frank Herbert, among others.

Cassidy’s Broadway credits include Present Laughter with Frank Langella, Our Country's Good, and Suddenly Last Summer.  She has appeared Off-Broadway in Bright Ideas and The Field at The Irish Rep (Drama Desk Nomination). She was "Doris Wolfe" on The Guiding Light and her other television appearances include Sex and the City, Law & Order, Law and Order SVU, and Elementary.  She also appeared in the films Purple Violets, Young Adult, and Definitely, Maybe.

“Jacqueline Winspear adds a fascinating episode to the Maisie Dobbs series, which justly gains fans with each new story. Orlagh Cassidy began the audio series with PARDONABLE LIES and continues her appealing portraits of the characters. She smoothly, and quite elegantly, delivers a variety of accents of the Kent countryside gentry and townsfolk...Cassidy nicely conveys Maisie's honest wisdom, sensible approach to her "inquiries," and spirited manners. The details of village life, a community of Gypsies, and the shifts in attitudes of the late 1920s make a vivid audio mystery.” —AudioFile, Earphones Award Winner

“This series is outstanding in atmosphere, characters, dialogue, sense of place and time; and Cassidy's narration is nothing short of equally outstanding, as she demonstrates her facile skills with the many accents, tones, and emotions Winspear demands of her. One of the best mystery series around.” —KLIATT

“The mysteries are tantalizingly uncovered by Masie's gifts of observation and intelligence. An Incomplete Revenge is one of the best mysteries of 2008...Orlagh Cassidy is pitch perfect in her reading...” —Deadly Pleasures

“Orlagh Cassidy unveils Maisie's character with a narration that makes a perfect composition of the text. Emotional tones convey post-war hopelessness and the painful division of the classes, adding to the mystery's tension.” —AudioFile magazine on Messenger of Truth