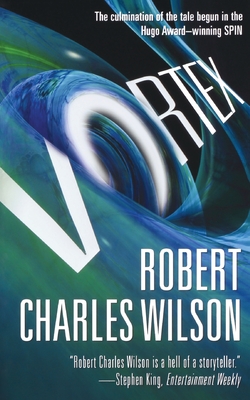 This is book number 3 in the Spin series.

Vortex tells the story of Turk Findley, the protagonist introduced in Axis, who is transported ten thousand years into the future by the mysterious entities called "the Hypotheticals." In this future humanity exists on a chain of planets connected by Hypothetical gateways; but Earth itself is a dying world, effectively quarantined.

Turk and his young friend Isaac Dvali are taken up by a community of fanatics who use them to enable a passage to the dying Earth, where they believe a prophecy of human/Hypothetical contact will be fulfilled. The prophecy is only partly true, however, and Turk must unravel the truth about the nature and purpose of the Hypotheticals before they carry him on a journey through warped time to the end of the universe itself.

Robert Charles Wilson was born in California and lives in Toronto. His novel Spin won science fiction’s Hugo Award in 2006. Earlier, he won the Philip K. Dick Award for his debut novel A Hidden Place; Canada’s Aurora Award for Darwinia; and the John W. Campbell Award for The Chronoliths.

“I'm not a big science fiction fan, but I'll read anything with a story and a low geek factor. Wilson is a hell of a storyteller, and the geek factor in his books is zero. Like Battlestar Galactica on TV, this is SF that doesn't know it's SF…. There's plenty of imagination here, as well as character and heart.” —Stephen King on Spin

“Spin is many things: psychological novel, technological thriller, apocalyptic picaresque, cosmological meditation. But it is, foremost, the first major SF novel of 2005, another triumph for Robert Charles Wilson in a long string of triumphs.” —Locus

“Of all SF writers currently alive, Robert Charles Wilson may be the best at balancing cosmic drama with human drama.” —Locus