Year One: Chronicles of The One, Book 1 (Paperback) 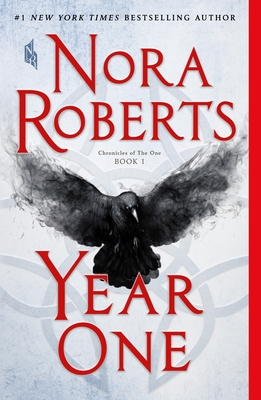 A stunning new novel from the #1 New York Times bestselling author Nora Roberts—Year One is an epic of hope and horror, chaos and magick, and a journey that will unite a desperate group of people to fight the battle of their lives…

It began on New Year’s Eve.

The sickness came on suddenly, and spread quickly. The fear spread even faster. Within weeks, everything people counted on began to fail them. The electrical grid sputtered; law and government collapsed—and more than half of the world’s population was decimated.

Where there had been order, there was now chaos. And as the power of science and technology receded, magick rose up in its place. Some of it is good, like the witchcraft worked by Lana Bingham, practicing in the loft apartment she shares with her lover, Max. Some of it is unimaginably evil, and it can lurk anywhere, around a corner, in fetid tunnels beneath the river—or in the ones you know and love the most.

NORA ROBERTS is the #1 New York Times bestselling author of more than 230 novels, including Legacy, The Awakening, Hideaway, Under Currents, The Chronicles of The One trilogy, and many more. She is also the author of the bestselling In Death series written under the pen name J.D. Robb. There are more than 500 million copies of her books in print.

“Electric and ground-breaking…A fast-paced, mesmerizing, and thought-provoking novel that will no doubt add to Roberts' legions of fans.” --Kirkus, Starred Review

“Fascinating characters and a well-built dystopia combine with a riveting plot that will attract a whole new group of readers." --Library Journal, Starred Review

“What Roberts has done, with her radical departure, is ensure that she will find new fans among readers attracted to apocalyptic sf and speculative fiction.” --Booklist

"Roberts knows exactly how to spellbind an audience.” --The Washington Post

“Nora Roberts has turned her pen to apocalyptic fiction. And, oh boy, she really delivered...fast-paced and energetic.” --Bustle

“The queen of the best-seller list is kicking off a new trilogy, a foray into dystopian fantasy that may earn the novelist a few gazillion more fans.” -- AARP.org, Best Books of Winter 2018

Recommended as one of four books students should read over winter break by The Carolinian, UNC Greensboro