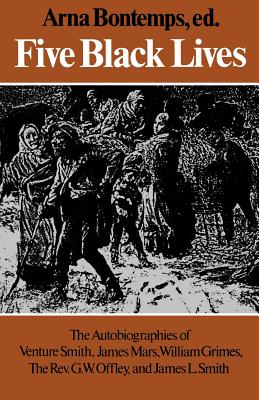 Five ex-slave narratives spanning 150 years in time, from 1729 to 1870, and a geographical area from Africa to Connecticut

Five Black Lives is a collection of ex-slave narratives which spans 150 years in time, from 1729 to 1870, and some thousands of miles in geographical area from Africa to Connecticut. The autobiographies include the lives of Venture Smith, a native of Africa who ended his days as a resident of East Haddam, Connecticut; James Mars, born a slave near Norfolk, Connecticut in 1790, and freed at twenty-five by state law; William Grimes, a native of Virginia, who became Connecticut's first known runway when he arrived in New Haven about 1808; G.W. Offley, from Maryland, who was bought free by his father and later settled in Hartford; and James L. Smith, of Virginia birth, who escaped from slavery and settled in Norwich, Connecticut.--Victor B. Howard, The New England Quarterly.