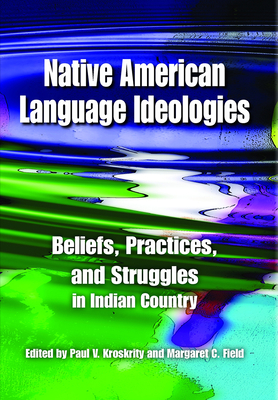 Beliefs and feelings about language vary dramatically within and across Native American cultural groups and are an acknowledged part of the processes of language shift and language death. This volume samples the language ideologies of a wide range of Native American communities--from the Canadian Yukon to Guatemala--to show their role in sociocultural transformation.

These studies take up such active issues as "insiderness" in Cherokee language ideologies, contradictions of space-time for the Northern Arapaho, language socialization and Paiute identity, and orthography choices and language renewal among the Kiowa. The authors--including members of indigenous speech communities who participate in language renewal efforts--discuss not only Native Americans' conscious language ideologies but also the often-revealing relationship between these beliefs and other more implicit realizations of language use as embedded in community practice.

The chapters discuss the impact of contemporary language issues related to grammar, language use, the relation between language and social identity, and emergent language ideologies themselves in Native American speech communities. And although they portray obvious variation in attitudes toward language across communities, they also reveal commonalities--notably the emergent ideological process of iconization between a language and various national, ethnic, and tribal identities.

As fewer Native Americans continue to speak their own language, this timely volume provides valuable grounded studies of language ideologies in action--those indigenous to Native communities as well as those imposed by outside institutions or language researchers. It considers the emergent interaction of indigenous and imported ideologies and the resulting effect on language beliefs, practices, and struggles in today's Indian Country as it demonstrates the practical implications of recognizing a multiplicity of indigenous language ideologies and their impact on heritage language maintenance and renewal.

Paul V. Kroskrity is a professor of anthropology at the University of California at Los Angeles and editor of Regimes of Language: Ideologies, Polities, and Identities.

Margaret C. Field is an associate professor and the chair of the American Indian Studies program at San Diego State University.