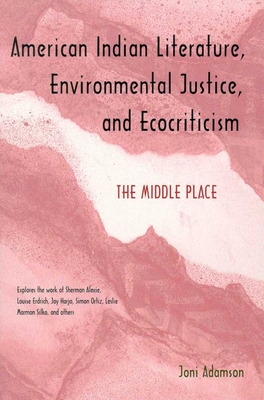 Although much contemporary American Indian literature examines the relationship between humans and the land, most Native authors do not set their work in the "pristine wilderness" celebrated by mainstream nature writers. Instead, they focus on settings such as reservations, open-pit mines, and contested borderlands. Drawing on her own teaching experience among Native Americans and on lessons learned from such recent scenes of confrontation as Chiapas and Black Mesa, Joni Adamson explores why what counts as "nature" is often very different for multicultural writers and activist groups than it is for mainstream environmentalists.

This powerful book is one of the first to examine the intersections between literature and the environment from the perspective of the oppressions of race, class, gender, and nature, and the first to review American Indian literature from the standpoint of environmental justice and ecocriticism. By examining such texts as Sherman Alexie's short stories and Leslie Marmon Silko's novel Almanac of the Dead, Adamson contends that these works, in addition to being literary, are examples of ecological criticism that expand Euro-American concepts of nature and place.

Adamson shows that when we begin exploring the differences that shape diverse cultural and literary representations of nature, we discover the challenge they present to mainstream American culture, environmentalism, and literature. By comparing the work of Native authors such as Simon Ortiz with that of environmental writers such as Edward Abbey, she reveals opportunities for more multicultural conceptions of nature and the environment.

More than a work of literary criticism, this is a book about the search to find ways to understand our cultural and historical differences and similarities in order to arrive at a better agreement of what the human role in nature is and should be. It exposes the blind spots in early ecocriticism and shows the possibilities for building common ground— a middle place— where writers, scholars, teachers, and environmentalists might come together to work for social and environmental change.

Joni Adamson is Associate Professor of American Literature and Folklore at the south campus of the University of Arizona. Her essays on Native American literature have appeared in Studies in American Indian Literatures and in Reading the Earth: New Directions in the Study of Literature and the Environment.

"Adamson challenges complacency throughout her book. . . . a truly innovative study that should be in all academic collections." —Choice

"Her persuasive and passionate arguments call her readers to awareness and responsibility." —ISLE

"Any reader, writer, or critic who supports the necessity of integrating multicultural understanding with environmentalism, who wants to understand the relationship of environment and justice in contemporary Native writing, and wants to learn more about the transformative potential of literature in community-based education needs to read this book very carefully. And they will no doubt enjoy themselves immensely in the process." —Patrick D. Murphy, author of Farther Afield in the Study of Nature-Oriented Literature

"In American Indian Literature, Enviornmental Justice, and Ecocriticism, narrative scholasrhip featuring the author's experiences among the people of Tohono O'odham nation furnish a powerful context for criticism that illuminates the complex and contested terrain of American Indian literature. Discussions of such writers as Simon Ortiz, Louise Erdich, Joy Harjo, and Leslie Marmon Silko take us beyond the stereotypes and into a richer understanding of the literature and its views of nature. American Indian Literature, Environmental Justice, and Ecocrticism, with its originial insights into environmnetal justice and American Inidian literature, makes an important contribution to the expansion of ecocrticism." —Terrell F. Dixon