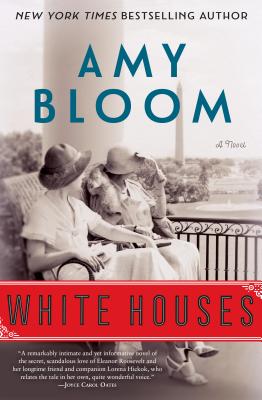 Amy Bloom is no stranger to historical fiction, but this is the first time she's written fiction about real people, and the result is a sensitive portrayal of a one-of-a-kind relationship. Lorena "Hick" Hickok is a successful female reporter when she moves into FDR's White House and becomes Eleanor Roosevelt's confidant, lover and dearest friend.  Bloom's writing sparkles, and she crafts an intriguing picture of both the time period and the Roosevelt family, but it's Hick herself - and her own amazing story - that really steals the show.

“Lorena Hickok, the most prominent female reporter in America, meets Eleanor Roosevelt in 1932 while reporting on Franklin Roosevelt's first presidential campaign. Almost immediately, Hick and Eleanor connect passionately and deeply, and Hick moves into the White House as 'First Friend.' The story of their bond is told with art and grace and a bit of intrigue by the wise and gifted Amy Bloom. A love story and historical novel, based on a true romance and unabashedly sensual, White Houses is extraordinary.”
— Cathy Langer, Tattered Cover Book Store, Denver, CO

For readers of The Paris Wife and The Swans of Fifth Avenue comes a “sensuous, captivating account of a forbidden affair between two women” (People)—Eleanor Roosevelt and “first friend” Lorena Hickok.

Lorena Hickok meets Eleanor Roosevelt in 1932 while reporting on Franklin Roosevelt’s first presidential campaign. Having grown up worse than poor in South Dakota and reinvented herself as the most prominent woman reporter in America, “Hick,” as she’s known to her friends and admirers, is not quite instantly charmed by the idealistic, patrician Eleanor. But then, as her connection with the future first lady deepens into intimacy, what begins as a powerful passion matures into a lasting love, and a life that Hick never expected to have. She moves into the White House, where her status as “first friend” is an open secret, as are FDR’s own lovers. After she takes a job in the Roosevelt administration, promoting and protecting both Roosevelts, she comes to know Franklin not only as a great president but as a complicated rival and an irresistible friend, capable of changing lives even after his death. Through it all, even as Hick’s bond with Eleanor is tested by forces both extraordinary and common, and as she grows as a woman and a writer, she never loses sight of the love of her life.

From Washington, D.C. to Hyde Park, from a little white house on Long Island to an apartment on Manhattan’s Washington Square, Amy Bloom’s new novel moves elegantly through fascinating places and times, written in compelling prose and with emotional depth, wit, and acuity.

“Amy Bloom brings an untold slice of history so dazzlingly and devastatingly to life, it took my breath away.”—Paula McLain, author of The Paris Wife

Amy Bloom is the author of Come to Me, a National Book Award finalist; A Blind Man Can See How Much I Love You, nominated for the National Book Critics Circle Award; Love Invents Us; Normal; Away, a New York Times bestseller; Where the God of Love Hangs Out; and Lucky Us, a New York Times bestseller. Her stories have appeared in The Best American Short Stories, O. Henry Prize Short Stories, The Scribner Anthology of Contemporary Short Fiction, and many other anthologies here and abroad. She has written for The New Yorker, The New York Times Magazine, The Atlantic Monthly, Vogue, O: The Oprah Magazine, Slate, Tin House, and Salon, among other publications, and has won a National Magazine Award. She is the Shapiro-Silverberg Professor of Creative Writing at Wesleyan University.

“[Amy] Bloom deftly explores what might have been in this novel about the real romance between Eleanor Roosevelt and journalist Lorena Hickok. . . . It’s a sensuous, captivating account of a forbidden affair between two women, one of them viewed by all the world as a saint.”—People

“‘All fires go out,’ Hickok says, explaining her lingering feelings to Franklin. ‘It doesn’t mean that we don’t still want to sit by the fireplace, I guess.’ In White Houses, Bloom has built up exactly the sort of blaze that will draw readers to linger.”—Time

“[An] irresistibly audacious re-creation of the love affair between Eleanor Roosevelt and journalist Lorena ‘Hick’ Hickok . . . Bloom convincingly weaves tender romance with hard-boiled reality. . . . Bloom notes that the White House staff routinely cropped Hickok out of photos. In White Houses, she’s in the center of the frame, and nobody who reads this sad, funny, frisky novel is going to forget her.”—USA Today

“Profoundly affecting . . . Bloom’s Hick is frank, funny, and irreverent. . . . White Houses, by seeing the Roosevelt era through the most unlikely of outsiders-turned-insider, brings a hidden chapter of East Wing history to life.”—The Boston Globe

“A remarkably intimate and yet informative novel of the secret, scandalous love of Eleanor Roosevelt and her longtime friend and companion Lorena Hickok, who relates the tale in her own, quite wonderful voice.”—Joyce Carol Oates

“Amy Bloom illuminates one of the most intriguing relationships in history. Lorena Hickok is a woman who found love with another lost soul, Eleanor Roosevelt. And love is what this book is all about: It suffuses every page, so that by the time you reach the end, you are simply stunned by the beauty of the world these two carved out for themselves.”—Melanie Benjamin, author of The Swans of Fifth Avenue