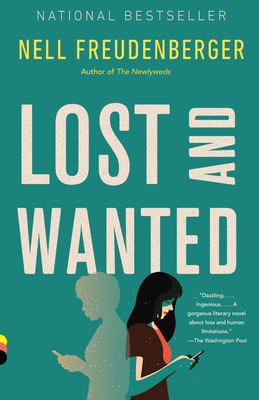 Helen Clapp, a renowned physicist, describes her work as the study of forces. But the death of Charlie, one of her oldest and dearest friends, leaves her at the mercy of forces that aren't easy to define or understand... especially when she starts receiving text messages from Charlie's phone. Freudenberger beautifully illuminates how Helen's grief touches all areas of her life—including her young son, and her feelings about the reappearance of a former partner and colleague—and the result is a story that's thoughtful, graceful, and wonderfully intelligent.

“Helen is a successful physicist and a single mother, but when her best friend, Charlie, dies, she must confront the limitations of love and science and learn how far each force can be stretched and where they might overlap. As in her previous novel, The Newlyweds, Freudenberger writes with understated authority about grief, motherhood, and coming to terms with the decisions you make throughout your life. Everyone in Helen’s orbit is touched by Charlie’s death, and their grief is as mysterious as the scientific questions Helen grapples with in her work. This is a powerfully beautiful novel.”
— Tyler Goodson, Avid Bookshop, Athens, GA

ONE OF THE BEST BOOKS OF THE YEAR:
VOGUE • FRESH AIR

As a professor of physics at MIT, Helen Clapp disdains notions of the supernatural in favor of rational thought and proven ideas. So it’s perhaps especially vexing when, on an otherwise unremarkable Wednesday in June, she gets a phone call from a friend who has just died.

That friend was Charlotte Boyce, Helen’s roommate at Harvard. The two women once confided in each other about everything: Helen’s struggles as a young woman in science, Charlie’s as a black screenwriter in Hollywood, their shared challenges as parents. But as the years passed, they gradually grew apart. And now Charlie is permanently, tragically gone.

Drawn back into her friend’s orbit, Helen is forced to question the laws of the universe that have always steadied her mind and heart. Suspenseful, perceptive, deeply affecting, Lost and Wanted is a story of friends and lovers, lost and found, at the most defining moments of their lives.

Nell Freudenberger is the author of the novels The Newlyweds and The Dissident, and of the story collection Lucky Girls, which won the PEN/Malamud Award and the Sue Kaufman Prize for First Fiction from the American Academy of Arts and Letters. Named one of The New Yorker’s “20 under 40” in 2010, she is a recipient of a Guggenheim Fellowship, a Whiting Award, and a Cullman Fellowship from the New York Public Library. She lives in Brooklyn with her family.

“[An] intellectually rich and soulfully deep novel by one of our most talented fiction writers.” —O, The Oprah Magazine

“Timely and delightfully observant of relationships, this novel is deeply heartfelt, amazingly intellectual, and beautifully thought-provoking.” —The Christian Science Monitor

“[Freudenberger] takes up weighty themes such as grief and sexism in the worlds of academia and entertainment, peppering the narration with evocative asides on black holes and quantum entanglement. . . . The prose is enticing [on] friendship, that most unstable and mysterious of connections.” —Vogue

“Engrossing. . . . [This is] Freudenberger doing her best work.” —Vulture

“Intelligent and moving—astute. . . . Freudenberger is excellent in her account of female friendships.” —Los Angeles Review of Books

“There aren’t many novels that bring to mind both Middlemarch and Bridget Jones’s Diary—but Lost and Wanted is one of them. . . . Freudenberger’s willingness to accept human contradictions—and to lay them out with a combination of calm rigour and rueful comedy—triumphantly makes Lost and Wanted the real thing . . . An endlessly rich novel.” —The Times (UK)

“An empathetic and gorgeous novel.” —Refinery29

“Stunning . . . a beautiful and moving novel. . . . The integration of ideas from physics sparks in the reader new ways of thinking about the nature of time and existence, as well as about human relationships.” —Publishers Weekly (starred review)

“Brimming with wit and intelligence and devoted to things that matter: life, love, death, and the mysteries of the cosmos. Nell Freudenberger is good at explaining physics, but her real genius is in the depiction of relationships.” —Kirkus Reviews (starred review)

“A magnificent novel: a warm and insightful look into human relationships and the mysteries of time.” —BookPage (starred review)