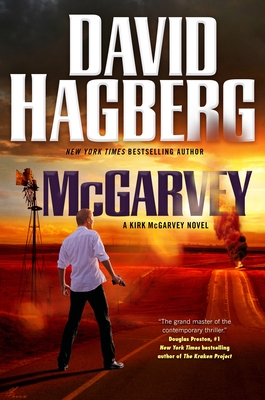 This is book number 25 in the McGarvey series.

When Kirk McGarvey investigates the mysterious death of his parents so many years ago, he uncovers long-buried secrets that put him head to head and mano a mano with . . . Vladimir Putin.

After Mac calls Putin out, the Russian dictator decides he wants him dead. Battling Russian hit squads as well as enemies at home, McGarvey must fight like the devil to save the himself, his friends, and the US of A in this engrossing international thriller from David Hagberg.

David Hagberg (1947-2019) was a New York Times bestselling author who published numerous novels of suspense, including his bestselling thrillers featuring former CIA director Kirk McGarvey, which include Abyss, The Cabal, The Expediter, and Allah’s Scorpion. He earned a nomination for the American Book Award, three nominations for the Mystery Writers of America Edgar Allan Poe Award and three Mystery Scene Best American Mystery awards. He spent more than thirty years researching and studying US-Soviet relations during the Cold War. Hagberg joined the Air Force out of high school, and during the height of the Cold War, he served as an Air Force cryptographer.

“Hagberg edges out Tom Clancy for commander of our uniquely American, military based thrillers and espionage novels: high-concept plot, non-stop action, insider knowledge of how things work out there in our complicated, high-combat world.”
—James Grady, New York Times bestselling author of Last Days of the Condor