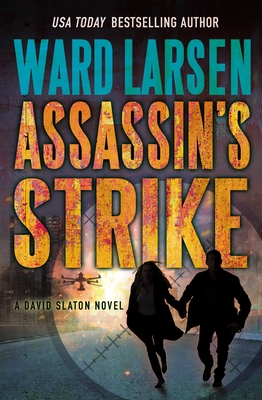 This is book number 6 in the David Slaton series.

In a Syrian palace, the presidents of Russia and Iran undertake a clandestine meeting. No staff or advisors are permitted in the room. No records are kept. By necessity, however, there are two witnesses: the interpreters. The Russian, Ludmilla Kravchuk, returns to her hotel room burdened by what she has heard. When her Iranian counterpart is murdered before her eyes, Kravchuk fears she is next and goes into hiding in Syria.

The CIA gets word of the defection. Desperate to uncover the purpose of the meeting, they task their newest off-the-books operator—legendary assassin David Slaton—to undertake a daring rescue. Deep inside Syria’s war-torn borders, what Slaton finds is a plot that will tear the Middle East apart. And one that only he can stop.

WARD LARSEN is a USA Today bestselling author and three-time winner of the Florida Book Award. His work has been nominated for both the Edgar and Macavity Awards. A former US Air Force fighter pilot, Larsen flew more than twenty missions in Operation Desert Storm. He also served as a federal law enforcement officer and is a trained aircraft accident investigator. Look for Amber Entertainment's film adaptation of Larsen's first thriller, The Perfect Assassin.