The Currents of Space (Paperback) 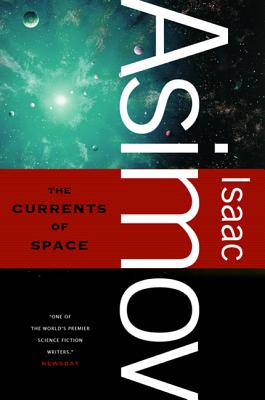 By Isaac Asimov
Email or call for price.
Out of Print

Classic science fiction adventure in the Foundation universe by grandmaster Isaac Asimov. Only one man can warn the planet Florinia that it is doomed by an astronomical catastrophe -- but he has amnesia and is a slave.

High above planet Florinia, the Squires of Sark live in unimaginable wealth and comfort. Down in the eternal spring of the planet, however, the native Florinians labor ceaselessly to produce the precious kyrt that brings prosperity to their Sarkite masters.

Rebellion is unthinkable and impossible. Not only do the Florinians no longer have a concept of freedom, any disruption of the vital kyrt trade would cause other planets to rise in protest, resulting in a galactic war. So the Trantorian Empire, whose grand plan is to unite all humanity in peace, prosperity, and freedom, has allowed the oppression to continue.

Living among the workers of Florinia, Rik is a man without a memory or a past. He has been abducted and brainwashed. Barely able to speak or care for himself when he was found, Rik is widely regarded as a simpleton by the worker community where he lives. As his memories begin to return, however, Rik finds himself driven by a cryptic message he is determined to deliver: Everyone on Florinia is doomed…the Currents of Space are bringing destruction. But if the planet is evacuated, the power of Sark will end-so there are those who would kill the messenger. The fate of the Galaxy hangs in the balance.

Isaac Asimov, author of the Foundation trilogy and many other novels, was one of the great SF writers of the 20th century, and his hundreds of books introduced many thousands of readers to science fiction. Born in Brooklyn, he lived in Boston and in New York City for most of his life.

“One of the world's premier science fiction writers.” —Newsday

“Isaac Asimov is the greatest explainer of the age.” —Carl Sagan

“For fifty years it was Isaac Asimov's tone of address that all the other voices of SF obeyed.… For five decades his was the voice to which sf came down in the end. His was the default voice of SF.” —The Encyclopedia of Science Fiction
“Obviously, Isaac Asimov had a lot of fun concocting this merry tangle of interplanetary power politics. . . . If it isn't often science-fiction, it is always beautifully contrived melodrama. The reader will have just as much fun as Mr. Asimov.” —The New York Times on The Currents of Space

“Science fiction on the larger scale is Isaac Asimov's specialty. . . . Clear writing and excellent suspense make this book a welcome addition to the science fiction lists.” —The New York Times on The Stars, Like Dust


“How do you explain Isaac Asimov to Earth men? How do you even begin to describe that glorious union of all-American optimism, bleeding-heart Yiddishkeit, and cutting-edge science speculation? You can't. He's one of a kind. . . . Psycho-history buffs will love this book for its through-the-looking-glass view of the Foundation series. Everyone else will love it because it's fun, fun, fun.” —Fantasy & Science Fiction on Pebble in the Sky