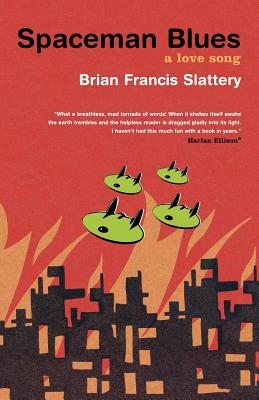 By Brian Francis Slattery
$18.99
On Our Shelves Now

When Manuel Rodrigo de Guzmán González disappears, Wendell Apogee decides to find out where he has gone and why. But in order to figure out what happened to Manuel, Wendell must contend with parties, cockfights, and chases; an underground city whose people live in houses suspended from cavern ceilings; urban weirdos and alien assassins; immigrants, the black market, flight, riots, and religious cults.

Painted in browns and grays and sparked by sudden fires, Spaceman Blues is a literary retro-pulp science-fiction-mystery-superhero novel, the debut of a true voice of the future, and a cult classic in the making.

Brian Francis Slattery was born and raised in upstate New York. He is an editor for the U.S. Institute of Peace and the New Haven Review. He is the author of the novels Spaceman Blues, Liberation and Lost Everything, and is also a musician. He lives near New Haven, CT.

“Spaceman Blues is a mad ride related by a pulp sensibility filtered through the nonstop freneticism of New York's subcultures, real and imagined.” —Booklist

“For Fans Of: the surreal odyssey of Ralph Ellison's Invisible Man; Plan 9 from Outer Space.… For all its colorful characters and gonzo thrills, Slattery's debut is first and foremost a moving portrait of Wendell's griefs. A-” —Entertainment Weekly

“Slattery's debut is a kaleidoscopic celebration of the immigrant experience.… Pynchon crossed with Steinbeck, painted by Dalí: impossible to summarize, swinging from the surreal to the hyper-real, a brilliantly handled, tumultuous yarn.” —Kirkus Reviews

“The book is a marvel: funny, weird, touching, a joy to read not just for its music and its imagination, but for the generous and intelligent view of life that it offers: a view of life that is neither sentimental nor cynical, full of a certain type of hope but never blind to the miseries hope can cause. Spaceman Blues is a cousin and equal of some recent novels that have maintained my faith in the ability of fiction to simultaneously possess meaning, beauty, and vision, but it's a singular book, offering its own riffs on the joys and pains of life and its own rifts across the surface of our shared delusions and commingled dreams.” —Matthew Cheney, Las Vegas Weekly and The Mumpsimus

“I could think of two other Toms who came to mind while reading the book: Tom Wolfe and Tom Robbins.” —Leonard Lopate (regarding prior comparisons to Thomas Pynchon)

“Slattery's chaotic debut takes readers on a headlong trip to the end of the world.… Slattery has a grand time showing off the colorful underground culture of cockfights, raves and endless intoxication that keeps things moving in his hallucinatory vision of New York.” —Publishers Weekly

“The book jacket describes Spaceman Blues as a ‘literary retro-pulp science-fiction-mystery-superhero novel,' and it not only lives up to the hype, but may include a genre or two more besides.… The book weaves a mixture of gritty war elements with hardboiled Hammett-like detective mystery, poetic romance reminiscent of Isabel Allende, and science fiction that brings Stanislaw Lem to mind--into something that seems fresh and compelling.” —School Library Journal

“Spaceman Blues is a welcome Band-Aid for those still mourning the loss of Kurt Vonnegut and his uniquely wacky, satirical brand of sci-fi. There's also a touch of Paul Auster's flair for genre blending and New York mythologizing.... A strange and whimsical mash note to the city, Slattery's apocalyptome proves that this newcomer is as thoughtful and irreverent as doomsayers come. [Four stars.]” —Time Out New York

“Early reviews of Spaceman Blues threw around the names of Pynchon, Doctorow, and Dick as stylistic touchstones. But Slattery should really be considered alongside NYC homeboys like Lethem and Shteyngart, the former for his loving tweaks of vintage pulp, the latter for his sharp immigrant comedy.… He's written a breezy, funny, formally playful book that, as apocalyptic novels go, is a helluva cheerier beach read than Cormac McCarthy's The Road, and so visual it cries out for a film treatment.” —Will Hermes, The Village Voice

“A few here might remember me mentioning a promise to review what I thought was one of the most original novels of the year. Well, here it is.… The end of the world was never so fun.” —Ain't It Cool News

“What a breathless, mad tornado of words! When it shakes itself awake the earth trembles and the helpless reader is dragged gladly into its light. I haven't had this much fun with a book in years.” —Harlan Ellison®

“With prose that effortlessly glides from one surrealist scene to another, Brian Slattery proves to be not only a visionary of the absurd, but also a genuinely talented postmodern voice.” —Michael Hearst of the band One Ring Zero (As Smart As We Are)

“It happens only very rarely--you read a book by a new author, and all you can say is ‘wow.' That was the case with Spaceman Blues: ‘Wow.' To say anything more would mean the inevitable descent into cheap clichés--‘hooked by the first paragraph,' ‘dizzying,' ‘a visionary roller-coaster ride,' ‘reminiscent, if anything, of Thomas Pynchon in its scope, its explosive imagination, the swirling, jazzy flow of the prose.' So much can and should be said about Mr. Slattery's debut--but I think I'll just stick with a simple ‘wow'--or if you prefer a visual summation, try an exclamation point on fire.” —Jim Knipfel, author of Slackjaw

“Brian Slattery's Spaceman Blues is brilliant. It's got the edgy paranoia and secret reality plotting of the best of Phil Dick, wrapped inside a contemporary stylistic sensibility that stands proudly against Miéville or Doctorow, with a heavy leavening of Nueva York emigre culture to give the work a distinctly American voice--the brawling, postmillennial, multicultural America of twenty-first century New York. This is the transmogrification of Phillip Roth's New York by way of The Matrix and a double handful of wild-ass street drugs into something all too recognizable.” —Jay Lake, author of Mainspring

“An extraordinary story that hovers between, beneath, above, but never in a familiar territory. But it hovers on thin margins--so much is recognizable, and yet… The thick reality of the informal economy as science fiction is one image that comes to mind. The specificity of this unsettlement becomes a way of seeing what you can otherwise not see.” —Saskia Sassen, author of Territory, Authority, Rights: From Medieval to Global Assemblages

“Spaceman Blues is a strange new creature: apocalyptic SF with the stylistic pyrotechnics of a beat poet on speed. There is nothing else out there like it, a vaulting, twisted song of decadent and desperate parties, grief and superheroes, sex and memory, and almost incidentally, the end of the world. This book leaves a glowing handprint on the mind which will not soon fade.” —Catherynne M. Valente, author of The Orphan's Tales: In the Night Garden

“Spaceman Blues is a brave, kinetic novel--a heady, original mixture of the surreal and the postmodern. It never stops moving and it never lets up. A spectacular new voice.” —Jeff VanderMeer, World Fantasy Award-winning author of City of Saints and Madmen