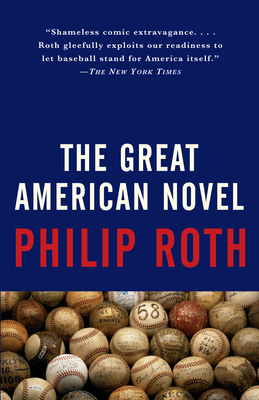 Gil Gamesh, the only pitcher who ever literally tried to kill the umpire. The ex-con first baseman, John Baal, "The Babe Ruth of the Big House," who never hit a home run sober. If you've never heard of them—or of the homeless baseball team the Ruppert Mundys—it's because of the Communist plot, and the capitalist scandal, that expunged the entire Patriot League from baseball memory.

In this ribald, wickedly satiric novel, Roth turns baseball's status as national pastime and myth into an occasion for unfettered picaresque farce, replete with heroism and perfidy, ebullient wordplay and a cast of characters that includes the House Un-American Activities Committee.

PHILIP ROTH won the Pulitzer Prize for American Pastoral. In 1998 he received the National Medal of Arts at the White House and in 2002 the highest award of the American Academy of Arts and Letters, the Gold Medal in Fiction. He twice won the National Book Award and the National Book Critics Circle Award. He won the PEN/Faulkner Award three times. In 2005 The Plot Against America received the Society of American Historians’ Prize for “the outstanding historical novel on an American theme for 2003–2004.” Roth received PEN’s two most prestigious awards: in 2006 the PEN/Nabokov Award and in 2007 the PEN/Bellow Award for achievement in American fiction. In 2011 he received the National Humanities Medal at the White House, and was later named the fourth recipient of the Man Booker International Prize. He died in 2018.

"Roth is better than he's ever been before.... The prose is electric." —The Atlantic