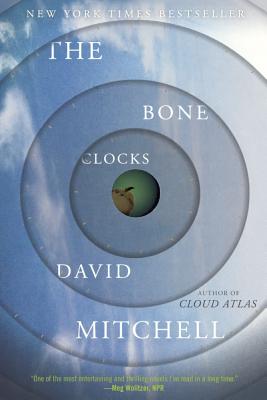 By David Mitchell
Email or call for price.
Out of Print

A genre-bending, mind-blowing thriller, this novel pushes the limits of what fiction can be. Mitchell's imagination & writerly powers are on full display here. Hands down, my favorite novel of 2014.

“Once again, Mitchell's inventiveness and imagination prove to be nothing short of genius. He combines dark fantasy, boldly original prose, and finely drawn characters who will keep the reader riveted from Holly Sykes' initial angst-ridden teen thought to the very last, hopeful sentence. Mitchell proves once again that he is a writer of no equal when it comes to the invention of language, place, and time, taking the reader to the edge of both the real and the imagined as if he were guiding you personally by the hand. I will not have to persuade anyone into enjoying The Bone Clocks!”
— Javier Ramirez, City Lit, Chicago, IL

The"New York Times"bestseller by the author of"Cloud Atlas"- Longlisted for the Man Booker Prize - Named One of the Top Ten Fiction Books of the Year by "Time, Entertainment Weekly, "and" O: The Oprah Magazine"- A "New York Times" Notable Book - An American Library Association Notable Book
Named to more than 20 year-end best of lists, including
NPR -"San Francisco Chronicle -The Atlantic- The Guardian""-Slate - BuzzFeed
"
"Look for special features inside. Join the Random House Reader's Circle for author chats and more."
With "The Bone Clocks, " David] Mitchell rises to meet and match the legacy of "Cloud Atlas." "Los Angeles Times"
Following a terrible fight with her mother over her boyfriend, fifteen-year-old Holly Sykes slams the door on her family and her old life. But Holly is no typical teenage runaway: A sensitive child once contacted by voices she knew only as the radio people, Holly is a lightning rod for psychic phenomena. Now, as she wanders deeper into the English countryside, visions and coincidences reorder her reality until they assume the aura of a nightmare brought to life.
For Holly has caught the attention of a cabal of dangerous mystics and their enemies. But her lost weekend is merely the prelude to a shocking disappearance that leaves her family irrevocably scarred. This unsolved mystery will echo through every decade of Holly's life, affecting all the people Holly loves even the ones who are not yet born.
A Cambridge scholarship boy grooming himself for wealth and influence, a conflicted father who feels alive only while reporting on the war in Iraq, a middle-aged writer mourning his exile from the bestseller list all have a part to play in this surreal, invisible war on the margins of our world. From the medieval Swiss Alps to the nineteenth-century Australian bush, from a hotel in Shanghai to a Manhattan townhouse in the near future, their stories come together in moments of everyday grace and extraordinary wonder.
Rich with character and realms of possibility, "The Bone Clocks"is a kaleidoscopic novel that begs to be taken apart and put back together by a writer"The""Washington Post"calls the novelist who's been showing us the future of fiction.
An elegant conjurer of interconnected tales, a genre-bending daredevil, and a master prose stylist, David Mitchell has become one of the leading literary voices of his generation. His hypnotic new novel, "The Bone Clocks, "crackles with invention and wit and sheer storytelling pleasure it is fiction at its most spellbinding.
Praise for "The Bone Clocks"
One of the most entertaining and thrilling novels I ve read in a long time. Meg Wolitzer, NPR
Mitchell] writes with a furious intensity and slapped-awake vitality, with a delight in language and all the rabbit holes of experience. "The New York Times Book Review"
Intensely compelling . . . fantastically witty . . . offers up a rich selection of domestic realism, gothic fantasy and apocalyptic speculation. "The Washington Post"
A] time-traveling, culture-crossing, genre-bending marvel of a novel. "O: The Oprah Magazine"
Great fun . . . a tour de force . . . Mitchell] channels his narrators with vivid expertise. "San Francisco Chronicle.

David Mitchell is the award-winning and bestselling author of "The Thousand Autumns of Jacob de Zoet, Black Swan Green, Cloud Atlas, Number9Dream, "and" Ghostwritten." Twice shortlisted for the Man Booker Prize, Mitchell was named one of the 100 most influential people in the world by "Time" in 2007. With KA Yoshida, Mitchell translated from the Japanese the internationally bestselling memoir "The Reason I Jump." He lives in Ireland with his wife and two children.