What the Fireflies Knew: A Novel (Large Print / Paperback) 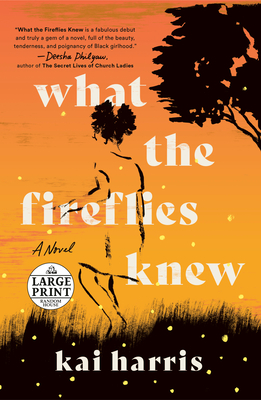 “What the Fireflies Knew is a fantastic, powerful debut that tackles difficult themes with empathy and respect. KB's voice is funny and heartbreaking. I expect this to be taught in schools someday alongside Toni Morrison.”
— Ellie Eaton, Busboys and Poets, Washington, DC

A coming-of-age novel told from the perspective of eleven-year-old KB, as she and her sister try, over the course of a summer, to make sense of their new life with their estranged grandfather after the death of their father and disappearance of their mother

After almost-eleven-year-old Kenyatta Bernice's (KB) father dies of an overdose and the debts incurred from his addiction cause the loss of the family home in Detroit, she and her teenage sister, Nia, are sent by their overwhelmed mother to live with their estranged grandfather in Lansing. Over the course of a single, sweltering summer, KB attempts to get her bearings in a world that has turned upside down—a father who is labeled a fiend; a mother whose smile no longer reaches her eyes; a sister, once her best friend, who has crossed the threshold of adolescence and suddenly wants nothing to do with her; a grandfather who is grumpy and silent; the white kids across the street who are friendly, but only sometimes. And all of them are keeping secrets. Pinballing between resentment, abandonment, and loneliness, KB is forced to carve out a different identity for herself and find her own voice. As she examines the jagged pieces of her recently shattered world, she learns that while some truths cut deep, a new life—and a new KB—can be built from the shards.

Capturing all the vulnerability, perceptiveness, and inquisitiveness of a young Black girl on the cusp of puberty, Harris’s prose perfectly inhabits that hazy space between childhood and adolescence, where everything that was once familiar develops a veneer of strangeness when seen through newer, older eyes. Through KB’s disillusionment and subsequent discovery of her own power, What the Fireflies Knew poignantly reveals that heartbreaking but necessary component of growing up—the realization that loved ones can be flawed, sometimes significantly so, and that the perfect family we all dream of looks different up close.

Kai Harris is a writer and educator from Detroit, Michigan, who uses her voice to uplift the Black community through realistic fiction centered on the Black experience. Her work has appeared in Guernica, Kweli Journal, Longform, and the Killens Review, amongst others. In addition to fiction, Kai has published poetry, personal essays, and peer-reviewed academic articles on topics related to Black girlhood and womanhood, the slave narrative genre, motherhood, and Black identity. A graduate of Western Michigan University’s PhD program, Kai was the recipient of the university’s Gwen Frostic Creative Writing Award in Fiction for her short story, “While We Live.” Kai now lives in the Bay Area with her husband, three daughters, and dog Tabasco, where she is an Assistant Professor of Creative Writing at Santa Clara University. Follow Kai on Twitter @authorkaiharris for a healthy dose of #blackgirlmagic. Read more at kaiharriswrites.com.