The War for Gloria: A novel (Large Print / Paperback) 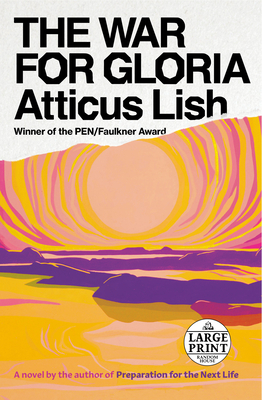 A NEW YORK TIMES NOTABLE BOOK OF THE YEAR • This “deeply immersive novel” (The Washington Post) from the author of the award–winning Preparation for the Next Life is an “epic coming-of-age tale filled with pain, heartache, fear, and undying love” (The Associated Press), as a young man’s yearning to protect his dying mother requires him to risk destroying his estranged, enigmatic, powerful father.

“From its hypnotic opening pages, we find ourselves in the sure hands of a roaming omniscient narrator, one who knows intimately the beating hearts of its two central characters” —Andre Dubus III, The New York Times Book Review

Corey Goltz grows up in the working-class outskirts of Boston as the only child of Gloria, whose ambitions were derailed early but who has always given her son everything she can. Corey, restless, dreams of leaving home for a great adventure.

Instead, when he is fifteen, the world comes crashing down upon him, when Gloria is diagnosed with ALS and, too late, his estranged father, Leonard—a man of great charisma but dubious moral character—reenters the picture. Determined to be his mother’s hero at any cost, Corey begins shouldering responsibility for her expensive medical care, pushing himself to his physical and emotional limits as her disease cruelly progresses. And as Leonard’s influence over Corey grows, Corey must dismantle the myth of his father’s genius and confront the evil that lurks beneath it.

Gritty, visceral, and profoundly stirring, The War for Gloria tells the story of a young man, straddling childhood and adulthood, whose yearning to protect his mother requires him to risk destroying his father. An indelible work from a strikingly original voice in American fiction.

ATTICUS LISH is the author of Preparation for the Next Life, which won the 2015 Pen/Faulkner Award for Fiction and the 2016 Grand Prix de Littérature Américaine.

A NEW YORK TIMES CRITICS' TOP BOOK OF THE YEAR • ONE OF THE BEST BOOKS OF THE YEAR: TOWN & COUNTRY, KIRKUS

“The War For Gloria is an ambitious book with a lot to say about family loyalty and love . . . Lish is a sensational literary craftsman, using the words in his toolbelt to construct narrative that is at once coolly dispassionate and red hot with emotion . . . I will be thinking about The War For Gloria for a long time.” —Martha Anne Toll, NPR

“A force, an epic coming-of-age tale filled with pain, heartache, fear, and undying love . . . Lish has crafted a compelling tale filled with complex and at times, frightening characters that will keep you intrigued.” —Molly Sprayregen, The Associated Press

“Profoundly affecting . . . From its hypnotic opening pages, we find ourselves in the sure hands of a roaming omniscient narrator, one who knows intimately the beating hearts of its two central characters: Gloria, a young single mother, and Corey, her only child, a boy who shows a passion for sailing from studying books . . . Lish’s substantial gifts, first shown in his acclaimed debut novel, Preparation for the Next Life, are in abundant display here and throughout this gorgeously written book . . . All of this is captured by a passionate narrative voice that has clearly been around, one that intimately knows not only the rigors of confined combat in a cage fight but also the bruised and hungry heart of a woman yearning to fulfill her potential before she dies. But at the core of The War for Gloria is the unforgettable character of Corey, a young man who is left to care for his dying mother alone, a boy who is hurled into the hard streets to find his solitary way. With this, only his second novel, Lish has not only created a work of enduring art, he has distinguished himself as one of our finest writers.” —Andre Dubus III, The New York Times Book Review

“The poise of Mr. Lish’s writing makes this bleak story so dangerously absorbing. Gloria’s inexorable degeneration from ALS is charted with devastating care and observational ﬁnesse . . . The powerfully ambiguous ending brings to a ﬁtting close a remarkable portrait of a sensitive boy forced into a life of hardness and violence . . . [Lish is] a superbly original talent.” —Sam Sacks, The Wall Street Journal

“Solemn, punishing, kinetic, in easy contact with dark areas of the psyche, and yet heartbreaking in its portrait of a mother and son facing her mortal illness . . . Lish’s novel is powerful, intelligent, brooding and most of all convincing; it earns its emotions . . . It more than pays off on the promise of his first novel, Preparation for the Next Life, which won the 2015 PEN/Faulkner award . . . You never sense [Lish] is merely writing “quality fiction”; he seems to draw instead from a deep well of experience, especially when it comes to the tastes and textures of life on the economic margins . . . The War for Gloria works because the details are so casually drilled home . . . Gloria is this novel’s great, glowing presence. Lish is exacting in his portraiture.” —Dwight Garner, The New York Times

“Set on the fringes of greater Boston, a ‘grim and nihilistic’ world of construction sites, strip clubs, and cage fights, this assured novel revolves around the conflict between a teen-ager, Corey, and his neglectful, manipulative father. The novel offers a complex exploration of masculinity, veering from the fierce, destructive aggression of Corey’s encounters with his father to the tender, attentive dedication he displays toward his mother. Lish writes with unhurried precision, avoiding sentimentality yet generating enormous emotional resonance.” —The New Yorker

“Fascinating . . . Lish has a great lyrical talent, one on display in restrained flashes throughout . . . what a strange genius, this author, of a novel full of such tenderness and violence, such oedipal love and oedipal rage . . . Lish not only invokes, engages with, and subverts the modes of the Hollywood Boston Gothic—he dives headlong into them . . . I’ve never seen [Boston] evoked in such brilliant detail and with such total control on the page . . . The portrait is heartbreaking.”
—Christian Lorentzen, Harper’s Magazine

“A deeply moving and harrowing story of a teenage boy who takes care of his ALS-stricken mother and tries to distinguish himself from his toxic biological father. Confident and humble, this is a once-in-a-decade triumph.” –Publishers Weekly [Top 10 Books of the Year]

“Brutally devastating . . . The War for Gloria is an unrepentantly American novel — a big, unwieldy beast about the white working class, the travails of masculinity, Boston, and the ever-present ghosts of the past . . . Lish [is] the kind of writer who doesn’t just put his characters through the wringer but slowly and methodically destroys them, makes clear that this is a novel not of quiet epiphany and triumph but of American devastation.” —Alex Perez, Washington Examiner

"A painfully yet beautifully detailed history of Corey and Gloria and their journey through her illness…you have to admire Lish for pushing his vision to the limit, and some of his sentences are so powerful they seem to have been forged in some kind of roaring foundry.” —Marion Winik, WYPR

“Unflinching and heartbreaking . . . Lish imbues the male characters’ varied pitches of toxic masculinity with great sadness, smoothing the edges off their macho posturing, and he writes with devastating empathy of Gloria’s highs and lows. This is a tremendous achievement.”
—Publishers Weekly [starred review]

“With staccato prose and razor-sharp descriptions of working-class Boston, PEN/Faulkner Award-winner Lish excels at storytelling. The descriptions of Gloria’s struggle with ALS and Corey’s role as caregiver are nothing short of brilliant . . . [The War for Gloria] is powered by remarkable empathy and humanity."
—Booklist [starred review]