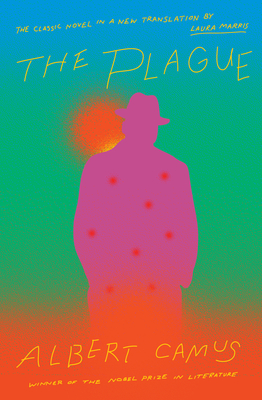 “We can finally read the work as Camus meant it to be read. Laura Marris’s new translation of The Plague is, quite simply, the translation we need to have.” —Los Angeles Review of Books

The first new translation of The Plague to be published in the United States in more than seventy years, bringing the Nobel Prize winner's iconic novel ("A redemptive book, one that wills the reader to believe, even in a time of despair." —The Washington Post) to a new generation of readers.

The townspeople of Oran are in the grip of a deadly plague, which condemns its victims to a swift and horrifying death. Fear, isolation, and claustrophobia follow as they are forced into quarantine. Each person responds in their own way to the lethal disease: some resign themselves to fate, some seek blame, and a few, like Dr. Rieux, resist the terror.

An immediate triumph when it was published in 1947, The Plague is in part an allegory of France's suffering under the Nazi occupation, as well as a timeless story of bravery and determination against the precariousness of human existence. In this fresh yet careful translation, award-winning translator Laura Marris breathes new life into Albert Camus's ever-resonant tale. Restoring the restrained lyricism of the original French text, and liberating it from the archaisms and assumptions of the previous English translation, Marris grants English readers the closest access we have ever had to the meaning and searing beauty of The Plague.

This updated edition promises to add relevance and urgency to a classic novel of twentieth-century literature.

Born in Algeria in 1913, ALBERT CAMUS published The Stranger--now one of the most widely read novels of this century--in 1942. He was awarded the Nobel Prize in Literature in 1957. On January 4, 1960, he was killed in a car accident.

LAURA MARRIS is a writer and translator. Her book-length translations include Louis Guilloux's novel Blood Dark, which was short-listed for the 2018 Oxford-Weidenfeld Translation Prize. Her translation of Jean-Yves Frétigné's biography of Gramsci is forthcoming from the University of Chicago Press in 2021. She teaches creative writing at the University at Buffalo.

“It takes no time to see that Ms. Marris’s version is handily superior.”
—Sam Sacks, The Wall Street Journal

“[An] extraordinary translation. . . . Brings the book into the twenty-first century with a vengeance.”
—Andrew Martino, Reading in Translation

“The novel could be issuing a warning. . . Under what conditions can the truth of social deprivation be seen?”
—Jacqueline Rose, London Review of Books ("Pointing the Finger: Jacqueline Rose on The Plague")

“Camus is a thinker of our age. . . [The Plague] is a testament to hope, resistance, and humanity.”
—Mugambi Jouet, Boston Review ("Reading Camus in Time of Plague and Polarization")

“[Camus] believed that the actual historical incidents we call plagues are merely concentrations of a universal precondition, dramatic instances of a perpetual rule: that all human beings are vulnerable to being randomly exterminated at any time, by a virus, an accident or the actions of our fellow man . . . He speaks to us in our own times not because he was a magical seer who could intimate what the best epidemiologists could not, but because he correctly sized up human nature.”
—Alain de Botton, The New York Times (“Camus on the Coronavirus”)

“Its relevance lashes you across the face . . . At first, the epidemic, like all catastrophes, secretly confirms what everyone knew already; that is, it extends the narcissism of the times into the new era, often via the forbidden hope — that it will smite one’s enemies while sparing oneself . . . Eventually, the town lapses into a kind of collective despondency with one predictable exception: the enduring complacency of ‘a privileged few, those with money to burn.’”
—Stephen Metcalf, The Los Angeles Times (“Albert Camus’ The Plague and our own Great Reset”)

“The microbe has no meaning; we seek to create one in the chaos it brings . . . The plague, as Camus insisted, exposes existing fractures in societies, in class structure and individual character; under stress, we see who we really are.”
—Adam Gopnik, The New Yorker (“The Coronavirus Crisis Reveals New York at Its Best and Worst”)

“Through his characters, Camus examines how people respond as individuals – and as part of a collective – to suffering and death. Whether it is a solitary experience or a show of social solidarity, nobody is indifferent.”
—Kim Willsher, The Guardian (“Albert Camus novel The Plague leads surge of pestilence fiction”)

“[In The Plague], Camus’s canonical treatment of a fictional bubonic plague outbreak in the Algerian city of Oran, the Nobel laureate trained a piercing eye on life under quarantine, with all its strangeness and misery. But the novel also takes seriously the lessons these trying moments can teach – treats them, even, as a kind of redemption.”
—Eric Andrew-Gee, The Globe and Mail (“The hope at the heart of Albert Camus’s plague novel, La peste”)

“Camus was preoccupied with the absurd . . . In The Plague he found a lens for projecting life at once suspended and more vivid . . . It is a redemptive book, one that wills the reader to believe, even in a time of despair.”
—Roger Lowenstein, The Washington Post (“In Camus’ The Plague, lessons about fear, quarantine and the human spirit”)

“[A] gorgeous and profound meditation on life in the shadow of death . . . I can’t think of a better book to recommend to anyone just now . . . A cautionary tale on how to mismanage a crisis, an encyclopedia of human psychology, and of course a terrifying worst-case scenario for our current predicament . . . More important than the answers it provides are the questions it forces us to ask. What matters? Why do we live? How durable are our values? What do we owe one another? What is heroism? What is decency?”
—Daniel Akst, Strategy + Business (“Business Lessons from Albert Camus”)

“A humanist allegory for the trapped desolation of Nazi-occupied Europe, and the alternate cowardice and bravery in the face of a rampant death machine.”
—Keziah Weir, Vanity Fair (“An Epidemic Novel for Every Kind of Reader”)

“The most telling passages in The Plague today are Camus’ beautifully crafted meditative observations of the social and psychological effects of the epidemic on the townspeople . . . Epidemics make exiles of people in their own countries, our narrator stresses. Separation, isolation, loneliness, boredom and repetition become the shared fate of all.”
—Matthew Sharpe, The Conversation (“Guide to the Classics: Albert Camus’ The Plague”)

“Surprisingly uplifting.”
—Courtney Vinopal, PBS News Hour (“8 books to read in the time of the coronavirus”)