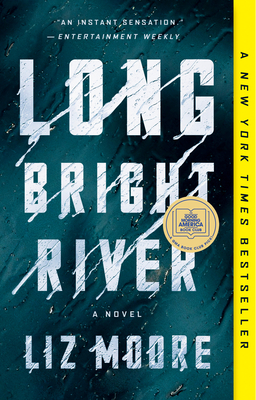 Anyone who enjoys smart, gritty police procedurals with a strong sense of place already has enough reason to read Moore's terrific new book. But the pair of sisters at the heart of the story—tough, guarded beat copy Mickey, and longtime addict Kacey—bring this tale a level of emotional depth I wasnt expecting (Mickey, in particular, is amazingly well-drawn). Moore paints a vivid picture of a run-down Philly neighborhood caught in the grips of the opioid crisis, and creates a compelling mystery to boot. This is excellent.

“This story’s power comes not just from its beautiful writing but the reality of its characters and the incisive nature of its setting. Liz Moore has created a masterpiece that exposes the opioid epidemic in Philadelphia, highlighting the vulnerability of its victims and the sheer scope of suffering it causes. From the first page, when the murder mystery begins, readers will suffer and rejoice with the novel’s oh-so-human characters. The power of this story is a fire that will linger for a long time.”
— Hilary Kotecki, The Doylestown & Lahaska Bookshops, Doylestown, PA

“Long Bright River begins with a list, a very long list, of people from the Kensington neighborhood of Philadelphia who have overdosed on opioids. The list is compiled by Mickey, a police officer who grew up in the neighborhood. On the list are both of her parents, and Mickey wonders when her beloved sister Kacey will be added. This is a very powerful story of addiction, family, and the hope for recovery and redemption.”
— Nancy Baenen, Arcadia Books, Spring Green, WI

ONE OF BARACK OBAMA'S FAVORITE BOOKS OF THE YEAR NAMED A BEST BOOK OF THE YEAR BY NPR, PARADE, REAL SIMPLE, and BUZZFEED AN INSTANT NEW YORK TIMES BESTSELLER A GOOD MORNING AMERICA BOOK CLUB PICK

Moore's] careful balance of the hard-bitten with the heartfelt is what elevates Long Bright River from entertaining page-turner to a book that makes you want to call someone you love." - The New York Times Book Review

This is police procedural and a thriller par excellence, one in which the city of Philadelphia itself is a character (think Boston and Mystic River). But it's also a literary tale narrated by a strong woman with a richly drawn personal life - powerful and genre-defying." - People

A thoughtful, powerful novel by a writer who displays enormous compassion for her characters. Long Bright River is an outstanding crime novel... I absolutely loved it.
--Paula Hawkins, #1 New York Times-bestselling author of The Girl on the Train Two sisters travel the same streets, though their lives couldn't be more different. Then one of them goes missing. In a Philadelphia neighborhood rocked by the opioid crisis, two once-inseparable sisters find themselves at odds. One, Kacey, lives on the streets in the vise of addiction. The other, Mickey, walks those same blocks on her police beat. They don't speak anymore, but Mickey never stops worrying about her sibling. Then Kacey disappears, suddenly, at the same time that a mysterious string of murders begins in Mickey's district, and Mickey becomes dangerously obsessed with finding the culprit--and her sister--before it's too late. Alternating its present-day mystery with the story of the sisters' childhood and adolescence, Long Bright River is at once heart-pounding and heart-wrenching: a gripping suspense novel that is also a moving story of sisters, addiction, and the formidable ties that persist between place, family, and fate.

Liz Moore is the author of the acclaimed novels Heft and The Unseen World. A winner of the 2014-2015 Rome Prize in Literature, she lives in Philadelphia.