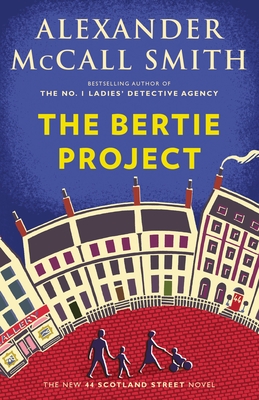 This is book number 11 in the 44 Scotland Street Series series.

Our beloved cast of characters are back, as are the joys and trials of life at 44 Scotland Street in this latest installment of Alexander McCall Smith’s delightfully charming series.

Bertie’s mother, Irene, returns from the Middle East to discover that, in her absence, her son has been exposed to the worst of evils—television shows, ice cream parlors, and even unsanctioned art at the National Portrait Gallery. Her wrath descends on Bertie’s long-suffering father, Stuart. But Stuart has found a reason to spend more time outside of the house and seems to have a new spring in his step. What does this mean for the residents of 44 Scotland Street?
The winds of change have come to the others as well. Angus undergoes a spiritual transformation after falling victim to an unexpected defenestration. Bruce has fallen in a rather different sense for a young woman who is determined to share with him her enthusiasm for extreme sports. Matthew and Elspeth have a falling out with their triplets’ au pair, while Big Lou continues to fall in love with her new role as a mother. And as Irene resumes work on what she calls her Bertie Project, reinstating Bertie’s Italian lessons, yoga classes, and psychotherapy, Bertie begins to hatch a project of his own—one that promises freedom.

Alexander McCall Smith is the author of the No. 1 Ladies’ Detective Agency series, the Isabel Dalhousie series, the 44 Scotland Street series, the Portuguese Irregular Verbs series, and the Corduroy Mansions series. He is professor emeritus of medical law at the University of Edinburgh in Scotland and has served with many national and international organizations concerned with bioethics.

Praise for The Bertie Project and Alexander McCall Smith’s 44 Scotland Street Series:
“What’s most rewarding about The Bertie Project is the author’s deep knowledge of and commitment to ethical behavior. . . . Some dilemmas are solved, others get more complicated—just like life. . . . Sit back, relax, and partake of life’s bounty.” —The Washington Post

“Longtime readers will love to see the masterful way McCall Smith brings things to a head, while newcomers will soon catch up and be entranced by this witty, wisdom-filled series.” —Booklist (starred review)

“Written with abundant wit [and] equally large dollops of wisdom.” —Scotland on Sunday

“[McCall Smith] proves himself a wry but gentle chronicler of humanity and its foibles.” —Miami Herald

“McCall Smith is a tireless student of human nature, at once acutely observant and gently indulgent.” —The Sydney Morning Herald