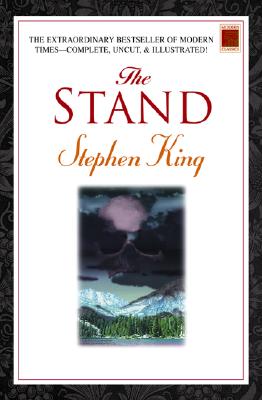 Arguably the greatest horror novel ever written by the greatest horror novelist, this is a true Modern Classic that was first published in 1978, and then re-published in 1990, complete and unabridged, with 150,000 words cut from the first edition restored, and now accompanied by unusual and imaginative line art. The total copies for both editions, in hardcover and paperback, exceeds 4 million worldwide.

The Stand is a truly terrifying reading experience, and became a four-part mini-series that memorably brought to life the cast of characters and layers of story from the novel. It is an apocalyptic vision of the world, when a deadly virus runs amok around the globe. But that lethal virus is almost benign compared to the satanic force gathering minions from those still alive to destroy humanity and create a world populated by evil.

Stephen King is a brilliant storyteller who has the uncanny gift of putting ordinary people in extraordinary circumstances, giving readers an experience that chills and thrills on every page.